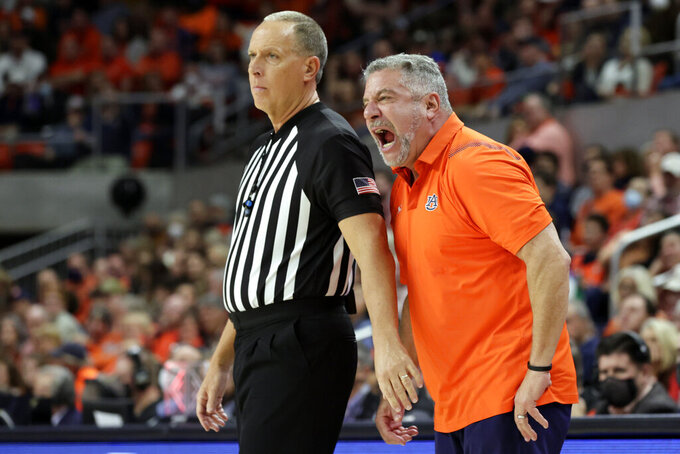 Auburn head coach Bruce Pearl reacts after a call during the first half of an NCAA college basketball game against Kentucky Saturday, Jan. 22, 2022, in Auburn, Ala. (AP Photo/Butch Dill)

AUBURN, Ala. (AP) — Auburn coach Bruce Pearl has agreed to a contract extension to remain on the Plains.

Athletic director Allen Greene announced in a video on social media along with Pearl on Friday night that “we locked him up," beneath the words “for life.” The 61-year-old Pearl led the top-ranked Tigers to their first Final Four in 2019.

They secured the No. 1 ranking for the first time in program history this week and enter Saturday's Oklahoma game riding a 16-game win streak and with a 19-1 record.

“We locked him up,” Greene said in the video.

Auburn didn't release any details of the new deal, which Pearl said “wasn't that hard” to agree on.

“The family and I are going to be able to stay and be your basketball coach for a long, long time,” the coach said in the video. “I'm grateful. I'm humbled and I'm blessed to be your coach.”

The Tigers made back to back NCAA Tournament appearances and were 25-6 when the tournament was canceled because of COVID-19 in 2020.

Pearl was fired from Tennessee in 2011 after the NCAA charged him with unethical conduct and then additional violations surfaced. Auburn hired him in 2014 to take over a program that hadn't been to the NCAA Tournament since 2003.