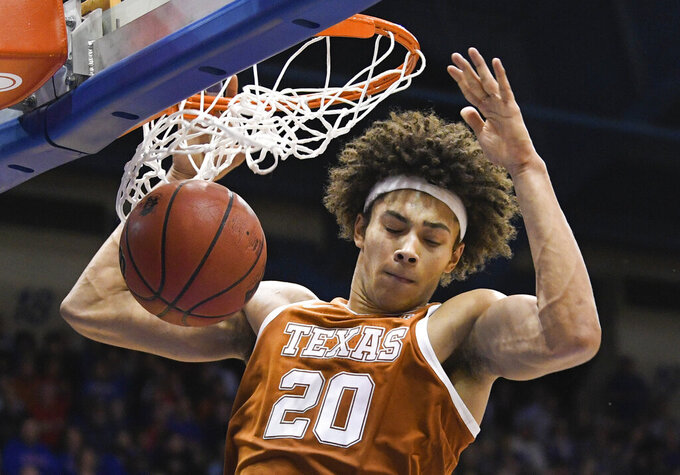 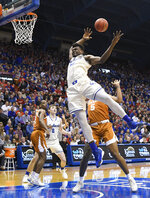 LAWRENCE, Kan. (AP) — Udoka Azubike came off the bench for Kansas for the first time this season. Coach Bill Self didn’t explain exactly why.

Nonetheless, Azubike finished with 17 points to lead the third-ranked Jayhawks to their seventh straight victory, 69-58 over Texas on Monday night.

“We didn’t have a great day yesterday," Self said of the decision not to start Azubuike. "We’re going to keep that in the house, but his attitude was good and I was actually very proud of him. I thought he came out and showed some maturity and responded in the way you’re supposed to."

Devon Dotson added 16 points and Marcus Garrett scored 11 for the Jayhawks (19-3, 8-1 Big 12). Four of Kansas’ seven straight wins have come since an ugly brawl in the closing seconds against rival Kansas State.

Matt Coleman III scored 20 points to lead the Longhorns (14-8, 4-5), who stayed within a possession of the lead for much of the game.

“The majority of the first half, I thought our guys did a really good job being at least even on the aggressiveness battle, physicality battle, for much of the half having an edge there," Texas coach Shaka Smart said. "I thought the second half they really flipped that.”

Azubike was replaced in the starting lineup by David McCormick as both schools got off to slow starts.

Building off a strong outing against Texas Tech on Saturday, McCormack tallied four early points, a block and a rebound before Azubuike checked in after nearly four minutes. The Longhorns (14-8, 4-5 Big 12) shot 3 of 14 from beyond the arc in the first half, but a 3 from Andrew Jones at the buzzer gave Texas a 33-31 edge entering the second.

A lob from Garrett to Azubuike fueled an 8-0 run for Kansas midway through the second half, building a 52-42 lead for the Jayhawks that allowed them to pull away.

Kansas outscored Texas 40-22 in the paint.

Texas: Coming off close victories against TCU and Iowa State, the Longhorns stayed close to the No. 3-ranked Jayhawks through the first half. Poor 3-point shooting set Texas back.

Kansas: With Silvio DeSousa still serving a 12-game suspension for the brawl against Kansas State, foul trouble down low again was a problem for the Jayhawks as McCormack and Azubuike each picked up their third foul only minutes into the second half. However, adjustments by both bigs kept Self from having to turn to a five-guard lineup.

Garrett’s contributions were important as usual for the Jayhawks.

“Like every game, he does a little bit of everything out there,” Dotson said.

“He did play well and he impacted the game in a big way on both ends,” Self said of Garrett. “If he’s productive like that game in and game out, we’re going to have a pretty good chance.”