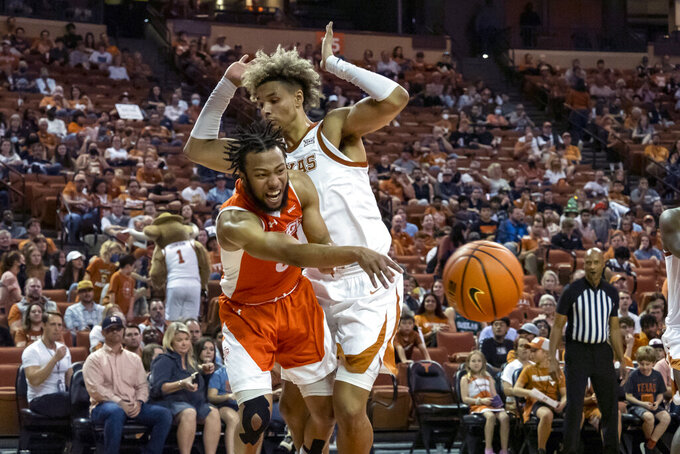 AUSTIN, Texas (AP) — Texas Rio Grande Valley's Matt Figger has been a college basketball coach for nearly 30 years, so he had an idea about what was coming after his team scored 41 points in the first half against the usually defensive-minded Texas.

He was right. No. 7 Texas limited UTRGV to 17 points in the second half while inducing 14 turnovers, enabling the Longhorns to win easily, 88-58 Friday night.

Christian Bishop, a backup forward who transferred to Texas from Creighton this season, scored 17 points in 14 minutes, making all nine of his free throws.

UTRGV (4-5) trailed 46-41 after shooting 53.6% in the first half and making a 9-0 sprint late in the period. Taylor scored 11 points in the half, six more than his average per game. Mike Adewunmi, a graduate student playing at his fourth school, scored 10 points by midway through the half, surpassing his average per game of 8.5.

Texas (6-1) broke away with a 19-0 push that began four minutes into the second half. UTRGV committed six turnovers against suffocating defensive pressure during the first 4:23 of the second half, enabling Texas to open a 21-point lead in the first six minutes.

The Longhorns made eight steals in the second half, including two by Mitchell, UTRGV shot 31.6%.

“We came in at halftime and had to figure out what our identity was,” Bishop said. "We finally showed what we can do. We just have to do it for 40 minutes. You can’t have four people playing defense. It’s five guys, working on a string together.”

UTRGV: Johnson brought a scoring average of nearly 21 points per game to the matchup. He scored 28 during a 94-85 loss at then-No. 14 Illinois. Several Longhorns alternated guarding Johnson, making him work hard for shots. Johnson missed on eight of his first nine shots, finishing 3 for 11. “He missed some shots tonight, so some of it was fortunate,” Texas coach Chris Beard said. “But I think you gotta give our guys credit.”

Texas: The Longhorns finally play their second game of the season against an opponent in the AP Top 25 when they visit No. 25 Seton Hall on Thursday, providing the Pirates remain ranked. The Longhorns' first game against a ranked team resulted in a 86-74 loss at then-No. 1 Gonzaga on Nov. 13. Texas has indulged in an extended holiday feast of mid-majors and other schools not from the power six conferences.

Bishop has hit 22 of 27 free throws (81.5%) this season after converting 54.9% in three years at Creighton. Bishop said he hasn't changed anything about his stroke. “Just repetition," Bishop said.

UTRGV is at Texas A&M-Corpus Christi on Wednesday.

Texas is at No. 25 Seton Hall on Thursday.