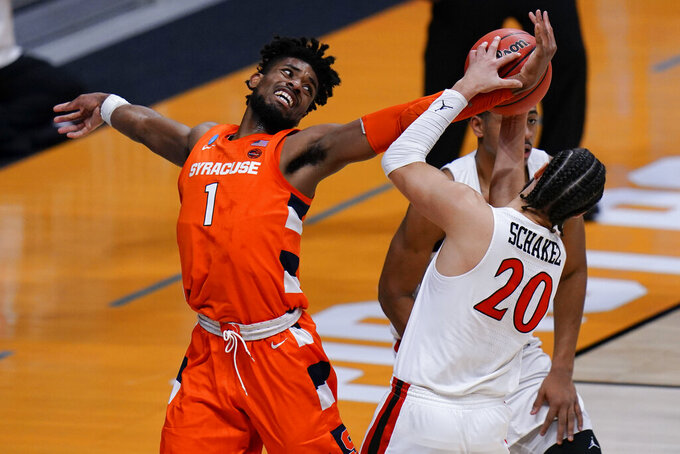 Syracuse forward Quincy Guerrier (1) fights for a rebound with San Diego State guard Jordan Schakel (20) during the first half of a college basketball game in the first round of the NCAA tournament at Hinkle Fieldhouse in Indianapolis, Friday, March 19, 2021. (AP Photo/AJ Mast) 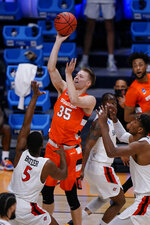 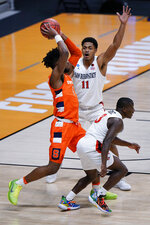 One of the best 3-point shooting teams in the country, too.

The No. 11 seed Orange held sixth-seeded San Diego State without a field goal for nearly a quarter of the game, sweet-shooting Buddy Boeheim hit seven 3-pointers and finished with 30 points, and Syracuse cruised to a 78-62 victory inside Hinkle Fieldhouse and into the second round of the NCAA Tournament.

“We want to keep going, keep building off this,” the younger Boeheim said. “We know there's still a long road ahead of us. It's a great feeling. We have a day tomorrow to get a practice in and we're right back Sunday.”

The Orange were trailing 18-14 midway through the first half when they clamped down on defense, holding San Diego State (23-5) without a field goal the rest of the half. And when the Aztecs threatened to trim their deficit to less than 10 early in the second half, the son of the longtime Syracuse coach was there to provide an answer.

Boeheim hit three quick 3-pointers, one of them curling off a screen and falling away, to put the game out of reach.

“Buddy just had one of those games like he's been having lately,” Jim Boeheim said. “I never had one of those so I don't know how it feels, but it looks like the basket is wide and he just made some great shots.”

Jordan Schakel had 17 points for the Aztecs, but the nation's third-best 3-point shooter was just 5 of 13 from beyond the arc. Leading scorer Matt Mitchell also had 17 points on 8-of-19 shooting for the Mountain West champs.

“We had a lot of great memories over the years. This is not how we wanted to end it,” said Schakel, choking up a bit. “In a couple days, I’ll be able to look back and be grateful. But right now, this one doesn't feel good.”

San Diego State made it clear from the moment it jacked up three 3-pointers on its first couple trips down the floor that the plan was to break Syracuse's decades-old 2-3 zone by shooting right over top of it.

Problem is the Aztecs didn't make many.

Beginning with Boeheim's own 3-pointer with 9:17 left, the Aztecs never scored again in the first half. They missed their final 10 attempts from beyond the arc, finished 3 of 20 from the 3-point line in the first half, and even missed the front end of a one-and-one with a few seconds left before the break.

“Obviously we knew we needed to make 3s in order to compete in this game,” Aztecs coach Brian Dutcher said. “When you're missing them, the defense starts shrinking in. It gets harder to drive.”

“Buddy Buckets” nearly outscored San Diego State by himself. Boeheim had 16 points as Syracuse built a 32-18 halftime lead; it was the fewest points Dutcher's high-scoring, perimeter-oriented team had scored in a half all season.

Mitchell, the Mountain West player of the year, missed all five of his 3-point tries and was 1 of 9 from the field.

Schakel finally got a 3-pointer to go right out of halftime, giving the few San Diego State fans in the crowd a long-awaited reason to cheer. But the Aztecs promptly went into another long slump, and Boeheim and the rest of the Orange's red-hot shooters continued to bury their own 3s, building a 56-30 lead before coasting to the finish.

“They played well. Offensively, obviously, we struggled to shoot the ball,” Dutcher said. “Their zone was very good. Coach Boeheim has had the success he’s had because he plays it better than anyone.”

Syracuse kept its late-season momentum going Friday night. The Orange had won three of their last four games, beating North Carolina and Clemson, and took Virginia to the wire in a buzzer-beating loss in the ACC Tournament.

San Diego State hoped to make a deep run after its loaded 30-2 team last season missed out on a chance to play in the tournament. But the Aztecs looked nothing like the team that brought a 14-game win streak to Indianapolis, winning them by an average margin of 18.4 points, failing to break the Syracuse zone and wilting on the defensive end.

The Orange will play the Mountaineers or Eagles on Sunday. Syracuse is 28-16 against West Virginia, its old Big East rival, and 3-0 against Morehead State with a win over the Eagles in the first round of the 1983 tournament.