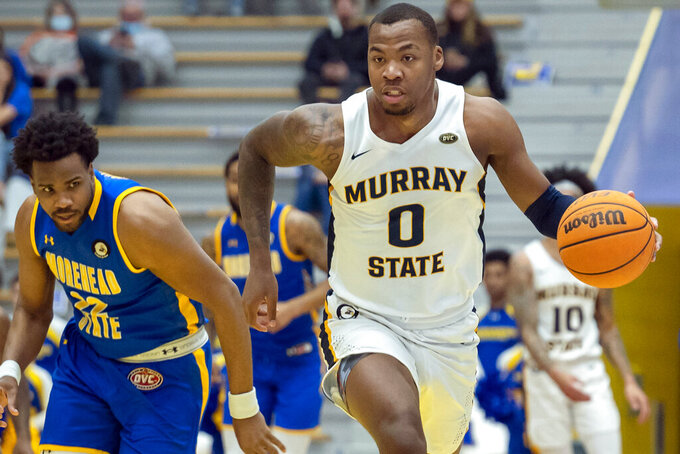 MOREHEAD, Ky. (AP) — KJ Williams didn't worry about fouling out. Nor did No. 23 Murray State wilt with an eight-point deficit to erase as the minutes dwindled.

The Racers just dug in to earn their latest in a string of wins in gutsy fashion.

The Racers (24-2, 14-0 Ohio Valley Conference) trailed 50-42 with 4:24 left before scoring 11 unanswered points to lead 53-50 with 1:01 left as Williams made baskets less than a minute apart. Tray Hollowell's 3-pointer with 36 seconds left tied the game before Brown drove inside for the go-ahead basket and Williams rebounded Ta'Lon Cooper's missed layup with four seconds remaining.

Williams was fouled and knocked down both free throws before making a steal to seal the tense road victory, Murray State's second in three days. He made 8 of 14 shots to finish with 21 points with 12 rebounds.

Pretty impressive considering Williams went to the bench with four fouls at the 7:06 mark.

“Of course, I had four fouls and had to be very careful how aggressively I played," Williams said. “I took that and I got back in and played aggressively, just not fouling. And we came out and got the win.”

Justice Hill added 11 points on 7-of-8 free throw shooting for Murray State, which outscored Morehead State 15-3 to close the game.

Johni Broome had 14 points and 12 rebounds for Morehead State (19-8, 11-3) which had its 20-game home winning streak stopped. The defending OVC champion Eagles had hoped to bounce back from a tough 48-47 loss two days ago at Belmont. but look to finish strong to claim a high seeding for next month's league tournament.

“We missed some easy shots and had some turnovers and have to clean some things up," Eagles coach Preston Spradlin said. “I've got great belief that we're one of the best teams, if not the best, in this league. ... We'll get another opportunity to prove it against those guys.”

Murray State won despite shooting 36% and just 3 of 19 from behind the arc. But the Racers were 2 of 5 after halftime, and those made the difference as they won the final regular-season meeting with Morehead as OVC members. Murray is leaving for the Missouri Valley Conference after this season.

The Racers also got to the foul line, converting 11 of 13 after halftime and 14 of 18 overall. Most importantly, they clamped down on the Eagles and Broome in the final minutes after the 6-foot-10 freshman forward appeared to seize momentum with eight points in a 12-3 run that provided a 45-36 lead.

And like last month's 77-66 win over Morehead State at home, Murray State saved its best for last minutes.

“We did not play well offensively, but Morehead State was a big factor in that," Racers coach Matt McMahon said. "I think we were down nine, and just found a way to get enough stops on the defensive end. And then we just had big-time players step up and make big-time plays those last four minutes.”

The in-state matchup was delayed almost 25 minutes from the scheduled 4 p.m. start because a section of arena lights were slow to come on after Morehead State’s player introductions. Both teams didn’t waste time waiting for the official start, quickly grabbing basketballs for a brief shootaround to stay sharp.

Murray State figures to gain some spots by staying hot and adding a gut check win.

Murray State: The Racers trailed early because of mistakes and an over-reliance of 3-pointers. They stuck with the plan and whittled down the lead for perhaps their biggest win in a string of triumphs.

Morehead State: The Eagles started 7 of 8 from the field and seemed to make baskets they needed to keep Murray at bay. They suddenly went cold, missing five of their final six shots in the last 4 1/2 minutes as their home streak ended.