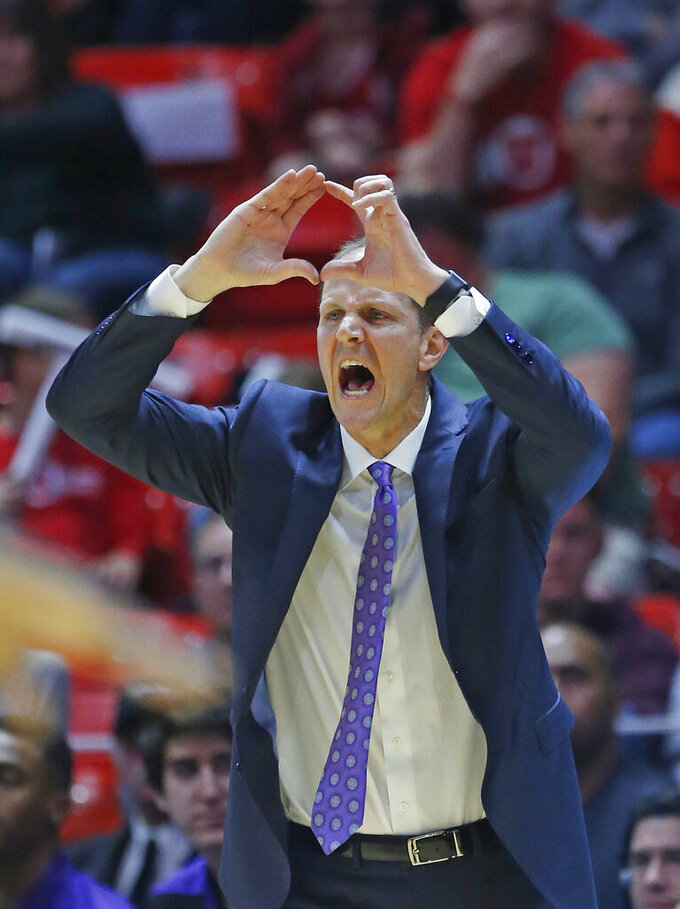 Washington head coach Mike Hopkins shouts to his team during the first half of an NCAA college basketball game against Utah, Thursday, Jan., 10, 2019, in Salt Lake City. (AP Photo/Rick Bowmer) 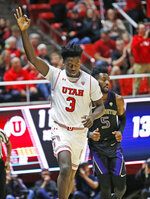 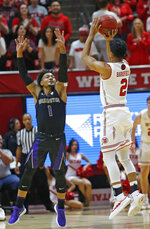 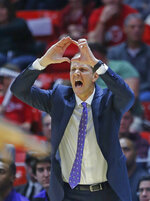 SALT LAKE CITY (AP) — Nazieh Carter and David Crisp haven't been the offensive headliners this season for Washington, but they complemented each other perfectly in a breakthrough performance.

"I just played off (Crisp's) energy. He came out hot and hit a lot of dagger shots to quiet the crowd," Carter said. "Then I got the ball, knocked down shots and once I got hot, it seemed everybody was making shots."

Crisp was 5 of-7 and Carter 3 of 4 from beyond the arc and the Husky defense held the Utes to season low in points.

As the duo was rolling they even started joking about who was going to finish with more points. But the game wouldn't have been so breezy without an impressive defensive performance.

"We were so active, had so much energy," Crisp said.

Jayce Johnson led the Utes with 12 points before leaving the game in the final minutes after getting hit in the face and falling to the court. Donnie Tillman had 10 for the Utes, who missed 24 of their 30 3-point attempts.

Both teams were knocked from their normal offensive flows by the defensive pressure at times. The Utes also played man-to-man defense but the Huskies stuck with their trademark zone and extended it to chase the Utes off the 3-point line or force awkward attempts.

"The big thing was protecting the 3-point line and we did that," Washington coach Mike Hopkins.

The Huskies' quick hands and length created dozens of deflections, forced 16 turnovers and nine blocked shots. The Utes were determined to pass into the middle of the zone but even when the ball got there, they often couldn't navigate the gauntlet of collapsing defenders.

"A lot of the guys out here hadn't seen that before," Utah coach Larry Krystkowiak said. "When you go to take shots and you have that much length flying at you, it's easy to see why they lead the conference in blocks and steals."

"I just know we've never beat these cats in my career, so I just wanted to do whatever it took to get that win," Crisp said.

Following his season high of 23 against Washington State last week, Crisp had a no-hesitation release even when closely guarded. Utah led 15-13 before Crisp buried four straight 3s. Since Pac-12 play began, the Huskies have suddenly found their touch from beyond the arc, hitting 41 percent.

Jaylen Nowell and Noah Dickerson, Washington's leading scorers, had a combined two points at halftime and yet the Huskies led 38-30.

"It can be anybody's night, anytime. Whatever any of us need to do to get a win, guys are going to step up," Crisp said.

The Huskies made a concerted effort to feed Dickerson on the post and he responded with seven straight points to open the second half and Washington led by 15.

A rare Utah 3-pointer by Sedrick Barefield got the Utes back within 47-42, but the Huskies ratcheted up the pressure once again and went on a 12-0 run, capped by Carter's jumper to make it 59-42.

"Coach preaches poise. Teams are going to go on runs ... but we just need to focus on our defense and then go hit daggers on the offensive end like we did tonight," Carter said.

Washington: The Huskies rely on defense and they smothered the Utes and reversed their usual struggles in Utah, snapping a five-game losing streak in Salt Lake City. If the Washington perimeter shooters can extend their recent hot shooting and pair it with Dickerson's low-post scoring, then the Huskies have a good chance of staying near the top of the Pac-12 standings.

"We're more consistent through these last two games as we have been all season," Hopkins said. "We're building."

Utah: The Utes hoped to capitalize on their strong opening weekend showing in Arizona when they beat Arizona State and took the Wildcats to overtime before losing. But some of their offensive struggles resurfaced and they could never get comfortable operating against the Washington zone. After scoring 33, 24 and 26 points, Barefield managed just six points on 2-of-10 shooting and no other Utes were able to get a rhythm.

Crisp's career high is 31 points in 2017 against Utah. A fan asked him not to do that again to the Utes. "I can't let y'all off the hook," Crisp laughed.

When he made the four 3s in the first half he was channeling his previous career night. "The last time I felt it like that was here in my sophomore year. I just felt it ... My guys did a great job finding me and that's where the work kicked in."