Collins hopes to get Northwestern back on winning path 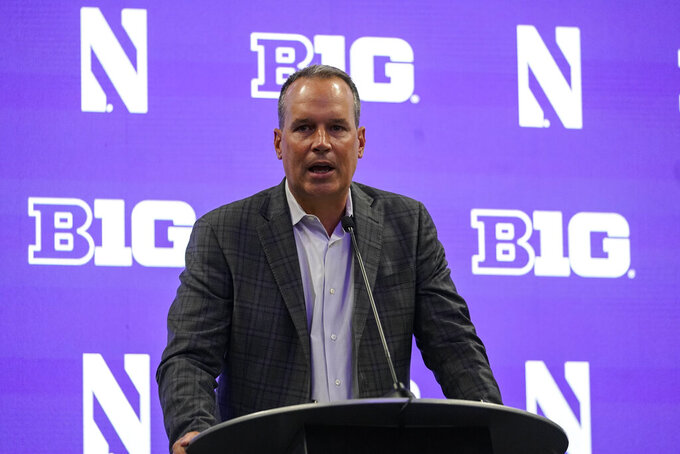 EVANSTON, Ill. (AP) — Chris Collins had Northwestern humming along just a few years ago, coaching the Wildcats to their first NCAA Tournament appearance.

Just when it looked like it was all falling into place, things came crumbling down.

After four straight losing seasons, Northwestern looks to put the brakes on the skid and start building some momentum again.

“I really like this group," Collins said. "Like I said, I think the leadership is in a great spot. There’s some older players that have really grown a lot over the last couple years and are ready to take that step. It’s going to be exciting for me to see what this can mean for us.”

The 2016-17 Wildcats went 24-12 in their second straight 20-win season. Not only did they reach the NCAA Tournament, a first for a program that hosted the inaugural Final Four in 1939, they beat Vanderbilt before losing a close game to Gonzaga. But since then, even with their arena getting a sparkling makeover, they're 45-74 overall and 19-58 in the Big Ten.

That includes a 9-15 mark last season, when they finished 6-13 in conference play following a promising start that included wins over Michigan State and Ohio State. But it unraveled quickly with 13 consecutive losses.

Northwestern has most of its key players back. Whether that's enough to make a jump remains to be seen, starting with the opener against Eastern Illinois on Nov. 9. It won't be easy, with five Big Ten teams ranked in the preseason poll — No. 6 Michigan, No. 7 Purdue, No. 11 Illinois, No. 17 Ohio State and No. 21 Maryland.

“At the end of the day, I want our team to be tough, to be together, and to be a group that comes out that people don’t like to play against,” Collins said.

Collins' future figures to be a topic of discussion, particularly with a new athletic director. The Wildcats brought in former NCAA executive Derrick Gragg after Jim Phillips left to become ACC commissioner and Mike Polisky stepped down shortly following a promotion from deputy AD amid backlash because he was named in a sexual harassment lawsuit filed by former Wildcats cheerleaders.

Collins, a Chicago-area product whose dad Doug played and coached in the NBA, brings a 118-134 record into his ninth season. The former Duke player and assistant is under contract through the 2024-25 season.

One key player the Wildcats will have to replace is Miller Kopp.

The 6-foot-7 forward transferred to Indiana after averaging 9.6 points over three seasons at Northwestern. He was the Wildcats’ second-leading scorer last year at 11.3 points per game.

Leading scorer Chase Audige returns for his second season at Northwestern after transferring from William & Mary. He averaged 12.3 points a year ago, including 25 in a loss at Ohio State in January. But he struggled at the foul line (54.4%) and beyond the arc, shooting 33.9% on 3-pointers.

Guard Boo Buie might be the Northwestern player with the most potential.

The 6-2 guard averaged 10.3 points and 4 assists while making a team-high 41 3-pointers as a sophomore last season. He dominated in the win over Michigan State, scoring a career-best 30 and nailing five 3s.

Pete Nance figures to play a big role down low once again.

The 6-10 forward averaged 11.1 points and 6.8 rebounds last season, most coming on the defensive end. He was third in the Big Ten in that category, at 5.8 per game. Nance's father spent 13 seasons in the NBA and his brother Larry Jr. plays for the Portland Trail Blazers.