Column: Get ready for the 2021 Summer Olympics in Tokyo 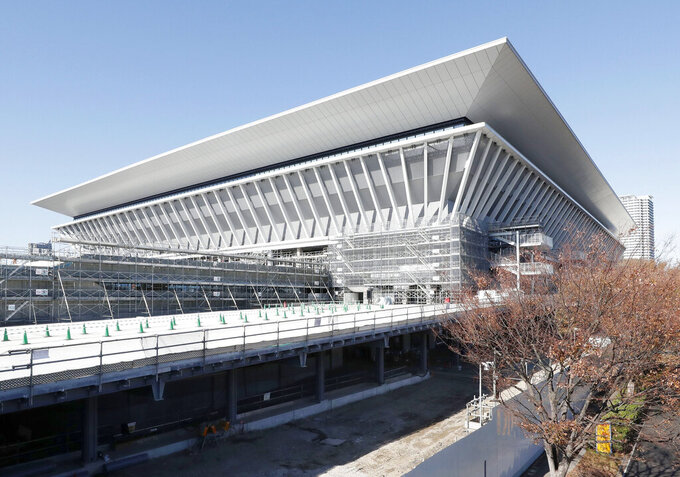 In this Nov. 21, 2019, photo, Tokyo Aquatics Center, a venue for swimming and diving at the Tokyo 2020 Summer Olympics, is seen in Tokyo. (Yukie Nishizawa/Kyodo News via AP, File)

One by one, some of the world's grandest sporting events have fallen or faded away to a later spot on the calendar.

On Tuesday, at least four more huge spectacles were taken down by the coronavirus: the French Open tennis tournament and Kentucky Derby horse race were both postponed until the fall, while soccer's biggest continental championships — the Euros and Copa América — won't be played until next year.

Which brings us to the biggest event of all.

Get ready for the 2021 Tokyo Olympics.

In what seems a fait accompli, the International Olympic Committee will almost surely be forced to delay the Summer Games for the first time — a staggering move that the organization and its Japanese partners seem to be slowly accepting after defiantly proclaiming for weeks that the games would go on as planned even as the world dealt with a frightening pandemic.

"We are in solidarity with the whole of society to do everything to contain the virus," the IOC said in a statement after meetings Tuesday. "The situation around the COVID-19 virus is also impacting the preparations for the Olympic Games Tokyo 2020, and is changing day by day."

Japanese Prime Minister Shinzo Abe was even more vague when asked again whether the Olympics, set to begin July 24, could be held on schedule.

"I want to hold the Olympics and Paralympics perfectly, as proof that the human race will conquer the new coronavirus," Abe said after a video conference with other world leaders this week.

The best time for that is next year.

While the IOC has a bit of wiggle room to put off such a momentous decision — the only modern Olympics that weren't held as planned were in 1916, 1940 and 1944, all canceled because of world wars — it shouldn't be stretched out for more than another month.

That wouldn't be fair to the athletes, who already are facing uncertainty and trepidation over disruptions in training and the loss of valuable competitions that help them prepare for the Summer Games.

"If they did postpone it, it would take a lot of pressure off this situation right now," said Bob Bowman, longtime coach of the most decorated Olympian, now-retired swimmer Michael Phelps. "People are scrambling. Most people are not training. If we had a little more time to get ready, that would probably be a good thing."

It would certainly be an enormous, complicated task to postpone the games for a year, given the complex financial web that includes broadcasters, sponsors, sports federations and a couple of hundred national Olympic committees. But it's hard to see any of them putting up too much resistance to staging the games in 2021 in light of current events and the world's economic free-fall.

A one-year delay is certainly better than other options that have been floated, which include staging events in empty arenas or just canceling the games altogether.

The first idea would be terribly unfair to the more than 10,000 athletes, not to mention the Japanese people who have furiously scooped up tickets for an event that should be a conduit for their enormous national pride.

The second idea is downright unthinkable given the humongous financial commitment that Japan has made — some $12 billion, according to the organizing committee, with other sources saying the actual outlay will wind up being more than double the official figure.

While a postponement would certainly present some daunting challenges, it seems feasible. Two of the most popular sports — track and swimming — would have to call off their every-other-year world championships set for next summer, but those host cities could be pushed back to 2023.

That would be the only fair course to take with Eugene, Oregon, which is building a new 30,000-seat stadium to host the track worlds in the United States for the first time.

Fukuoka, Japan, which is set to host FINA's 2021 aquatic world championships, could be offered the 2023 slot. Other cities that have already won bids for the 2023 events (Budapest, Hungary in track; Doha, Qatar for aquatics) could be pushed further down the line.

Most other sports would have to juggle their schedules as well, but they would have even more incentive than track and swimming to go along with whatever it takes to accommodate a one-year Olympic postponement.

Many athletes have suddenly had their world turned upside down by this pandemic. They are unable to train properly because facilities and venues are shut down to help prevent the virus from spreading. Critical events used to fine-tune Olympic preparations also are being canceled.

"This is the time when you're hoping to see progression from one meet to the next, something that's closer to the final product," said Bowman, who coaches the college team at Arizona State and still trains Olympic hopefuls such as Hali Flickinger and Allison Schmitt. "You're kind of testing some things like race strategy. You want to see these little rehearsals for the big show.

"It's probably more important than the training, to be honest," he added. "That's what makes the training so meaningful, when you're able to learn something at the last meet and then go work on it."

Normally at this point in the training, an Olympic athlete would be locked down in a tightly scripted routine, allowing him or her to put their full energy and focus into being at their best.

None of that is possible now, of course.

"What we all want to see while preparing for the Olympic games is sort of a predictable, regular rhythm to the competition and the training," Bowman said. "That's exactly what we don't have right now. That doesn't mean it can't be done, but it's definitely different. We're in uncharted territory."

Bowman's team has been practicing in small groups, though that will likely end when Arizona State shutters all campus facilities.

Yet even amid all the uncertainty, he keeps telling his athletes to do everything they can to be ready for the Olympics — whenever they might be held.

Any day now, the IOC should say: