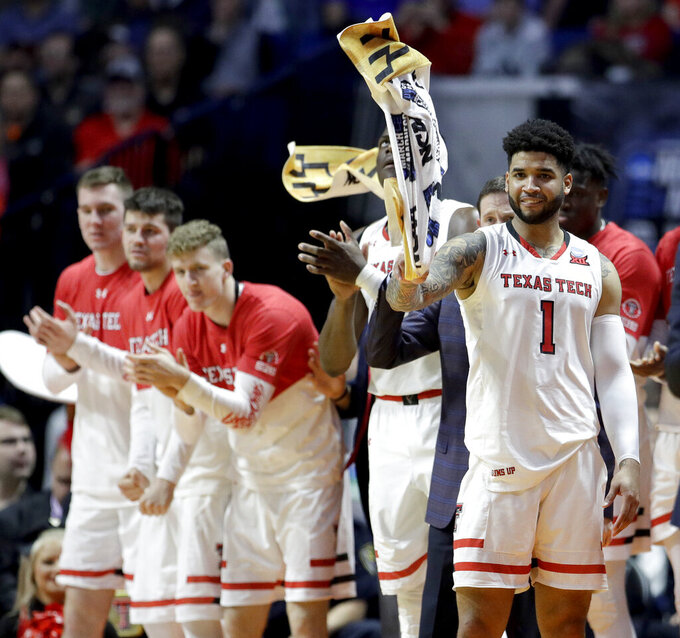 The Texas Tech bench celebrate after a basket during the second half of a first round men's college basketball game against Northern Kentucky in the NCAA Tournament Friday, March 22, 2019, in Tulsa, Okla. Texas Tech won 72-57. (AP Photo/Charlie Riedel)

TULSA, Okla. (AP) — Texas Tech had won nine straight games, tied for the Big 12's regular-season championship and was flying high before a deflating loss in the conference tournament to lowly West Virginia.

The Red Raiders hadn't played in eight days, desperate to put the disappointment behind them.

They finally did on Friday.

Jarrett Culver had 29 points, eight rebounds and seven assists, leading the No. 3 seed in the West Region to a 72-57 victory over Northern Kentucky in the first round of the nCAA Tournament.

"We just wanted to focus on us and put that behind us, learned and burned," said Culver, the Big 12 Player of the Year. "We just focused on us, details, how we got so far and how we made a run in the Big 12 and how we got to the March Madness tournament."

Tariq Owens added 12 points and Davide Moretti had 10 for Texas Tech (27-6), which is trying to reach the Elite Eight in back-to-back seasons for the first time.

"The first game of the tournament is always the toughest," said Red Raiders coach Chris Beard. "Just really proud of our guys tonight and our team effort. I thought we won this game as a team."

Tyler Sharpe scored 23 points and Dantez Walton had 11 points and seven rebounds for Northern Kentucky (26-9), the champions of the Horizon League.

"They're everything they're contracted up to be in terms of defensively," Northern Kentucky coach John Brannen said. "I did have concerns on our ability to score and that showed up today.

"Their physicality, I was hoping we'd get to the foul line more in terms of driving the basketball," Brannen said. "We weren't able to do that at all. Their physicality just kind of put us in situations that we weren't comfortable with."

Norse leading scorer Drew McDonald, the Horizon League's Player of the Year, was held to just five points on 2-of-13 shooting. He also had six rebounds and blocked two shots.

"We rely on Drew a lot. He's led us this whole season," Sharpe said. "I didn't feel like I had to necessarily take his role because we trust him. Even if he's missed every shot, we trust he's going to make the next one. I took what the defense gave me."

Limiting McDonald's effectiveness was a key to the Red Raiders' game plan.

"He was definitely one of the main focal points," Beard said. "He has the ability to score inside and out, and he's a great passer."

Northern Kentucky kept the game close throughout the first half and early in the second, pulling within 34-31 on Sharpe's three free throws with 18:06 remaining. But the Red Raiders responded with a 13-3 run over the next four minutes to open up a double-digit lead for the first time.

Texas Tech managed to keep its advantage over 10 points for the rest of the contest.

"In the second half, more than any big adjustment, we just want to stay aggressive," Beard said. "In the first half we played well offensively, and we had too many turnovers. Really kind of staying consistent with our original game plan with just an emphasis of getting a little bit more aggressive."

Northern Kentucky had another impressive season in just its third as an active member of Division I. The Norse lost to No. 2 seed Kentucky in the 2017 tournament. "You know, I couldn't be more proud of our young men and for what they've accomplished," Brannen said.

Texas Tech continued its strong defensive play, holding Northern Kentucky to 37.1 percent (23 for 62) from the field. The Norse entered the tournament averaging 79.1 points per game and ranking 24th in the nation at 48.1 percent shooting.

Northern Kentucky had a 39-31 edge in rebounding. ... Texas Tech missed its first six free-throw attempts and ended the first half 1 of 8 from the line. The Red Raiders then connected on all nine in the second half to finish 10 of 17 overall.

"We won't define our season by one game. We're 26-9," Brannen said. "What they've accomplished the last three years has never been done in the history of basketball. Couldn't be more proud of them, and we'll get better from this and we'll continue to put ourselves in position to be sitting up here answering questions in the NCAA Tournament."

Texas Tech will play the Buffalo-Arizona State winner on Sunday.