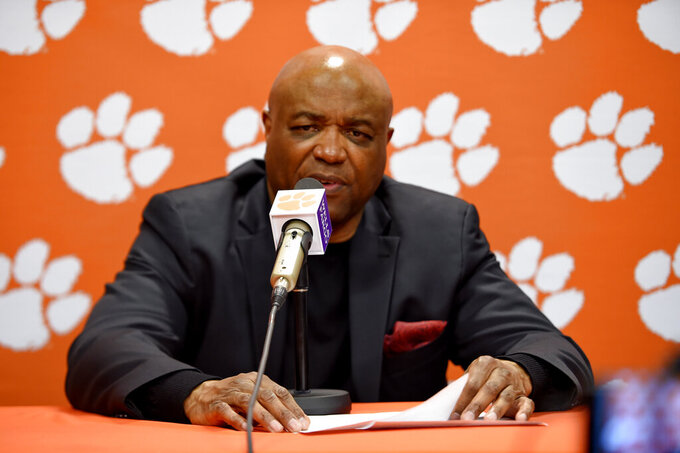 CLEMSON, S.C. (AP) — Clemson coach Brad Brownell had one thought when he watched young Al-Amir Dawes take the inbounds pass with only a few seconds left.

Dawes followed instructions perfectly on a three-quarter court-length drive that finished with a left-handed flip with a second to go as Clemson toppled another highly ranked team, rallying past No. 6 Florida State 70-69 on Saturday.

Dawes, a freshman, put the ball behind his back to start the run, then stutter-stepped to get free in the lane before driving around Florida State's Trent Forrest for the game-winning bucket.

“I knew how much time I had left and I was just ready to make a play,” said Dawes, who finished with 18 points.

Clemson seemingly made almost all the plays it had to down the stretch after falling behind 42-32 on Forrest's 3-pointer to start the second half.

After M.J. Walker's basket with 2:29 left put the Seminoles up 63-60, John Newman III hit a jumper and Tevin Mack nailed a 3-pointer to send Clemson in front.

And when Forrest hit a short jumper with 8.4 seconds left for Florida State's last lead, Dawes' dash gave the Tigers another highlight moment in a puzzling season that includes victories over then-No. 3 Duke and No. 5 Louisville.

It's the first time Clemson has beaten three Top Seven AP-ranked opponents in the same season since 1979-80. Oh, and don't forget the Tigers' first-ever win at North Carolina last month, ending their 0-for-59 lifetime in Chapel Hill.

And just like after beating Duke and Louisville, fans flooded the court in celebration.

“I think we've had several wins through the season, wins where we fought back,” Newman said. “I'm thankful for the experiences like that because in life, if you're resilient, anything's possible.”

Trapp had a chance to extend Clemson's 68-67 lead, but missed a pair of foul shots. Teammate Aamir Simms got the rebound and threw the ball into the open court as he approached the sideline, leading to what looked like a Florida State breakaway for Forrest.

But a referee's whistle stopped play. After a lengthy review and discussion, Florida State was awarded possession to set up Forrest's go-ahead basket.

Florida State coach Leonard Hamilton chuckled when asked about the whistle. He made it clear the delay and confusion didn't cost the Seminoles.

“What hurt us again was having the courage to let them go the length of the floor for the winning basket,” he said.

Clemson also sent the ACC title race back into a three-way chase.

Florida State had hoped to take another step toward its first ACC regular-season crown. Instead, the Seminoles joined No. 7 Duke and No. 11 Louisville with four league losses with just over a week left.

Devin Vessell had 14 points to lead the Seminoles, who saw their four-game win streak snapped.

Florida State: The Seminoles, like Duke and Louisville, lost a chance to take control of the ACC against the scrappy Tigers. Shots that fell early for Florida State did not down the stretch in losing for just the second time in nine games this month.

Clemson: What to make of the Tigers? They've beaten the three ACC leaders, yet have losses to Virginia Tech, Miami and Wake Forest. Clemson has been a developmental program and is clearly playing better in January and February than it did in November and December.

Florida State's Hamilton said his team was not overlooking the Tigers after his team's impressive showing over Louisville a few days earlier. “We haven't earned the right to overlook anyone,” he said.

Clemson forced six charges against Florida State, tied for fourth most in a game in program history. Brad Brownell said since the Tigers don't have tall players to protect the rim — their only regular over 6-foot-8 is 7-foot backup Trey Jemison — they must lock in on other ways to slow down opponents. “I'm not sure I've ever been in a game” where there have been that many, Florida State's Hamilton said.

Clemson plays for the final time on the road, going to Virginia Tech on Wednesday night.