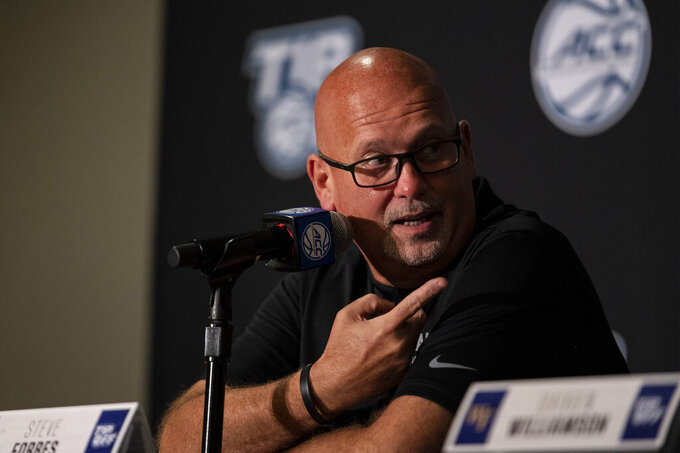 WINSTON-SALEM, N.C. (AP) — Steve Forbes spent last year as a new head coach trying to build a foundation amid the starts and stops of the COVID-19 pandemic.

That’s why Forbes isn’t focused on taking a lot from his debut season at Wake Forest. If anything – much like players who received an extra eligibility year from the NCAA due to the pandemic – he’s getting a second freshman season with more normal routines.

“I haven’t really talked about last year at all, to be honest with you,” Forbes said. “This is the first year as far as I’m concerned, and that’s really how I’m looking at it.”

“A lot of the teams I’ve been on before had maybe one or two seniors and then most of us were sophomores and freshmen,” said senior Isaiah Mucius, who averaged 10.3 points last year. “I think that balance allows the younger guys to kind of look up to us and then the older guys to lean on the younger guys for that energy when we need it in practice or games.”

Some other things to know about the Demon Deacons for the 2021-22 season:

It was unclear how well Williamson would transition from playing under Forbes at East Tennessee State to the ACC with his small frame.

Part of his offseason to-do list was to add strength while not losing his shooting touch.

“You definitely have to balance it out, because when you get stronger and you add weight – or also when you lose weight – it changes your game a little bit,” Williamson said, adding he feels more comfortable shooting with deeper range.

The Demon Deacons need a step forward from Whitt, who bypassed a final year of prep basketball to enroll early last year and get the jump on college basketball.

The 6-3, 180-pound Whitt started 10 games last year, but he shot just 32% from the field while having more turnovers (52) than assists (51). The good news is he has already gained ACC experience, even if it was in a very unusual season.

The Demon Deacons certainly brought in size with their additions.

The 6-8, 235-pound LaRavia offers some intriguing inside-out versatility after averaging 10.7 points and shooting 35.6% from 3-point range in two seasons with his Missouri Valley Conference program.

The 7-0, 230-pound Walton is a graduate student while the 6-10, 240-pound Sy started his career at Virginia Tech before making a stop in junior college and spending two seasons at Ole Miss.

In the freshman class, there’s 7-foot-1, 250-pound Matthew Marsh as one of two newcomers from England, the other being 6-4 guard Cameron Hildreth – the team’s highest-rated recruit according to 247sports.

Forbes doesn’t have to look hard for areas to address from Year 1.

Wake Forest ranked last in the 15-team ACC in shooting percentage (.410) and 14th in field-goal percentage defense (.469). The Demon Deacons ranked last among league teams in KenPom’s adjusted efficiency for offense (101.3 points per 100 possessions) and 13th in defense (101.9).

The Demon Deacons open against William & Mary on Nov. 10 in the first of five straight home games before traveling to Florida for the Emerald Coast Classic featuring Oregon State, Penn State and LSU.