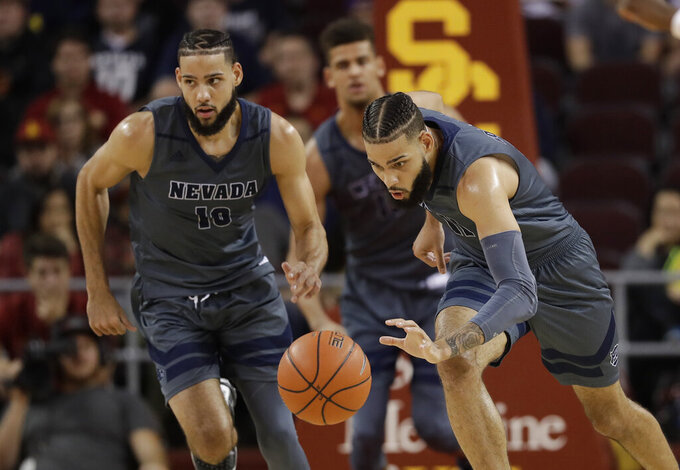 FILE - In this Dec. 1, 2018, file photo, Nevada forward Cody Martin, right, dribbles downcourt as his twin brother Caleb Martin, left, trails during the second half of an NCAA college basketball game against Southern California in Los Angeles. Florida's Jalen Hudson and the Martins will share the court in the opening round of the NCAA Tournament in Des Moines, Iowa. (AP Photo/Marcio Jose Sanchez, File) 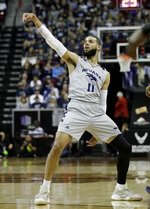 The guard trio played four years together in AAU basketball and squared off twice in the Atlantic Coast Conference while Hudson was at Virginia Tech and the twins were at North Carolina State. They split those head-to-head meetings.

Hudson and the Martins will share the court in the opening round of the NCAA Tournament in Des Moines, Iowa. Hudson and the 10th-seeded Gators (19-15, 9-9 Southeastern Conference) hope to keep playing their best basketball in the postseason while the twins and seventh-seeded Nevada (29-4, 15-3 Mountain West) will try to get back on track after losing more games (three) in the last 3 ½ weeks than they did in the season's first 3 ½ months.

It also will be bittersweet for either Hudson or the Martins since it will be the collegiate finale for the losing side.

"It's crazy it's going to end up like this," Caleb Martin said. "We'll be ready for it."

All three could be key players in the matchup at the Wells Fargo Arena.

The 6-foot-6 Hudson has taken his game to another level down the stretch. After finding more lows than highs through the first three months of the season, he's scored in double figures in eight of Florida's last nine games. He averaged 15.3 points during the stretch and given coach Mike White another dependable scorer alongside fellow senior KeVaughn Allen.

"He's been really locked in from a scouting report standpoint, from a schematic standpoint, even within game huddles," White said. "Jalen's really stepped up with how vocal he's being and how engaged he is, especially defensively. He's made a big jump, and I think it's carried over to him, obviously, getting more minutes and doing more offensively."

The Martins have been stout all season, averaging a combined 30.9 points, 9.6 rebounds and 9.4 assists for the Wolf Pack.

All three will be able to help with the scouting report this week.

"One of them is more of a scorer, Caleb Martin," Hudson said. "He's kind of a volume guy. Once he gets hot, it's super hard to kind of slow him down. ... Cody's more of like a point guard, more of a passer. ... They're both super versatile. They're very good players, very, very good players. I think they'll play at the next level for sure."

Naturally, the Martins had equal praise for Hudson.

"He's really, really good," Cody said. "He's athletic. He can shoot the ball. He's a pro. We've kept up with him throughout the whole season, last year, even when we were going through the (transfer) process, too. That's one of our good friends. He can play."

The three have played countless games together for an AAU basketball program that has travel teams in Virginia and North Carolina, where they grew up. They also played twice against each other in the ACC and kept close tabs on their careers since.

The brothers won the first meeting in February 2015, with Cody chipping in eight points off the bench. Caleb didn't play, and Hudson saw one minute of action.

The trio decided to transfer a few months later. The Martins landed at Nevada, and Hudson took a chance on joining White at Florida.

Now, all three are in the NCAA Tournament again — and matched up against each other in the postseason for the first and last time.