Georgia State looks to pull off its biggest NCAA stunner yet 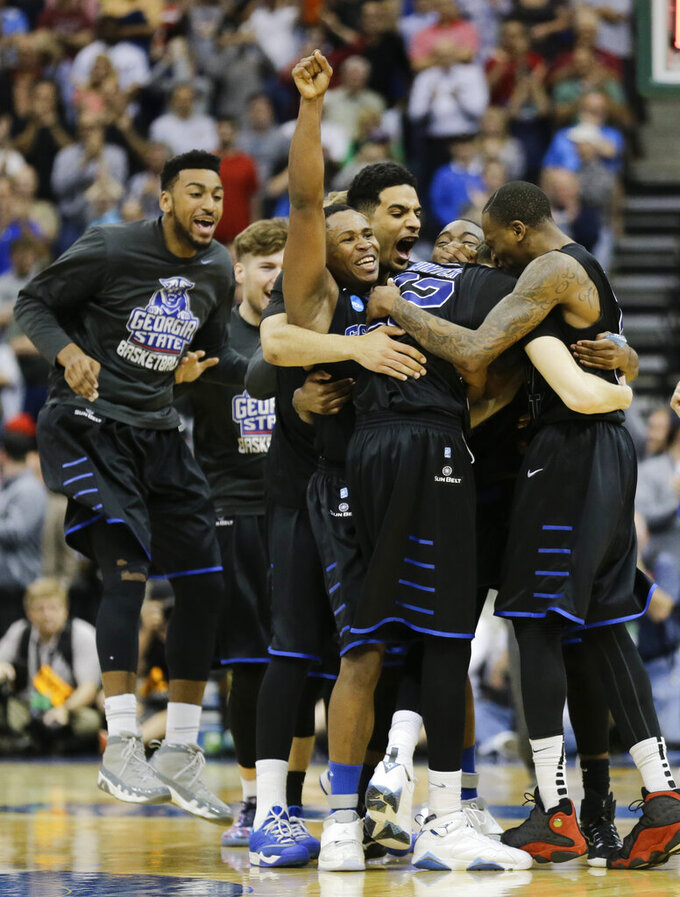 FILE - Georgia State players celebrate as they surround R.J. Hunter (22) after he made the game-winning shot against Baylor late in the second half in the second round of the NCAA college basketball tournament, Thursday, March 19, 2015, in Jacksonville, Fla. Georgia State won 57-56. The 2021-22 Georgia State team is heading to the NCAA tournament, making their fourth appearance in the past eight years, a run that began with the memorable showing in 2015. (AP Photo/Chris O'Meara, File) 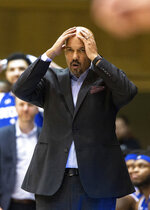 ATLANTA (AP) — Georgia State has a couple of stunners on its NCAA resume.

The Panthers will need to pull off their biggest shocker yet to be more than a one-and-done team in this year's men's tournament.

The Sun Belt Conference Tournament champions are a lowly No. 16 seed, getting set to face overall top seed Gonzaga on Thursday in Portland, Oregon.

“We were playing the best we've played all season at the end of the year, but we've not played our best yet,” coach Rob Lanier said Monday. “We've got a lot of room for growth, and there's another level we'll have to reach to give ourselves a chance in this game.”

While the Panthers (18-10) are huge underdogs, this is a seasoned group that is used to winning — no small feat in a state that has largely become a forgotten backwater for men's college basketball.

The Peach State's two most prominent programs, Georgia and Georgia Tech, both endured 20-loss seasons. The Bulldogs were particularly dismal, firing coach Tom Crean after a school-record 26 losses that included a 1-17 mark in the Southeastern Conference.

Georgia hasn't been to the NCAAs since 2015.

Georgia Tech did make the tournament last season, snapping an 11-year drought, but this season's 12-20 debacle showed the Yellow Jackets are still far from regaining the national stature they had in the 1980s and '90s.

Even so, Georgia State, a school in downtown Atlanta that once catered mainly to commuters, doesn't receive nearly as much attention as the Bulldogs or the Yellow Jackets in its own backyard.

That makes its success all the more satisfying.

“It’s always good to know we’re like the top dogs in the state,” sixth-year senior guard Corey Allen said with a sly grin.

The Panthers will be making their fourth NCAA appearance in the past eight years, a run that began with a memorable showing in 2015.

Rallying from a big deficit in the closing minutes, the Panthers knocked off third-seeded Baylor when R.J. Hunter — the son of then-coach Ron Hunter — hit a winning 3-pointer.

The shot sent the elder Hunter, who was hobbled by a torn Achilles, tumbling off the rolling stool he was using on the sideline.

The scene remains the highlight of Georgia State's rather thin sporting history.

Even though Ron Hunter now coaches at Tulane, his son is a frequent visitor to games and practices at his alma mater. His winning shot will surely be replayed in the lead-up to Thursday's game.

“We've definitely got to look back at that," Allen said. “That was a big part of this program's history.”

Today's players are too young to remember Georgia State's other NCAA victory, but it was nearly as shocking.

In 2001, while being coached by Lefty Driesell in the waning years of his Hall of Fame career, the 11th-seeded Panthers knocked off Big Ten powerhouse Wisconsin.

The upsets of Baylor and Wisconsin — not to mention UMBC becoming the first No. 16 seed to beat a top seed with their 2018 victory over Virginia — provide the Panthers with a glimmer of hope heading into their game against the Zags as 23 1/2-point underdogs.

“We're a winning program now,” said senior guard Kane Williams, who like Allen took advantage of an extra year of eligibility because of the COVID-19 pandemic. “We're a program that people need to take notice of. We're not just somebody you can walk over.”

Georgia State, which will move into a new 8,000-seat arena next season, overcame plenty of hardships and frustration to post its ninth straight winning campaign.

The Panthers' bus broke down in west Alabama while returning home from a 29-point loss at Mississippi State, five games were canceled because of COVID-19 outbreaks, and the team started 0-4 in the Sun Belt.

But Georgia State closed the season as the league's hottest team, entering the NCAAs with a 10-game winning streak.

“We’re not used to being losers around here," Williams said. “Once everybody saw that we wanted to win and we wanted to keep playing, there was no looking back. Everybody was just in our way at that point.”

Now, there's another team is in their way.

The toughest one yet.