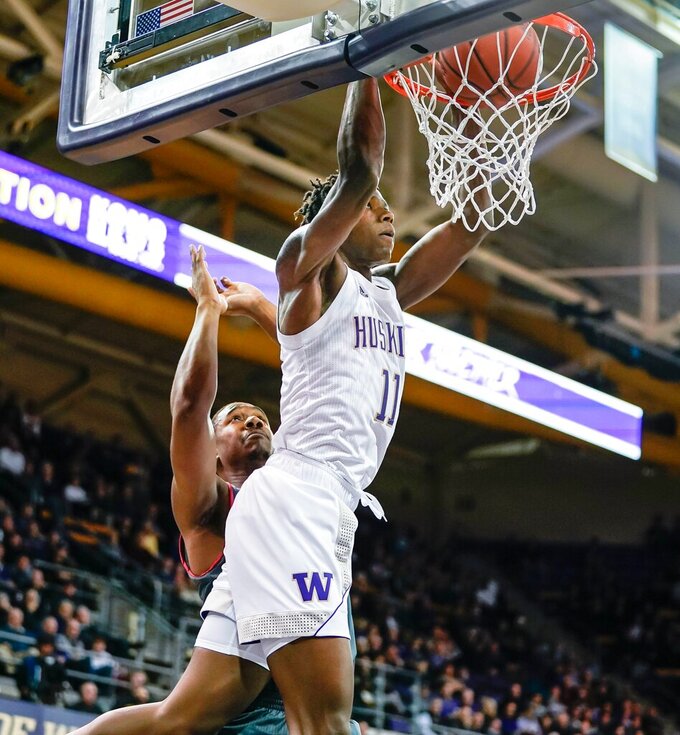 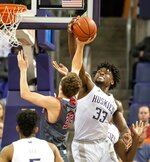 SEATTLE (AP) — Quade Green had no problem when Washington coach Mike Hopkins suggested his first-string point guard come off the bench for one night just to give the opponent a little different look.

Whether starting or not, Green has quickly become a critical component to the Huskies' success.

Green had 20 points and eight assists, Jaden McDaniels added 17 points before fouling out and No. 22 Washington beat Eastern Washington 90-80 on Wednesday.

“I think with a young team and a team that’s still trying to find its offensive identity, having someone that is that aware and present of making sure he’s getting everyone to their spots, I think that’s a big reason why we’re making offensive strides,” Washington center Sam Timmins said about Green.

Coming off the bench for the first time this season, Green — a transfer from Kentucky who became eligible just before the opener — provided a spark after a sluggish start by the Huskies. Washington scored a season-high 47 points in the first half and withstood every challenge in a foul-filled second half from the preseason favorites in the Big Sky Conference.

Outside of a few sloppy stretches, Washington (7-1) also avoided getting caught looking ahead to Sunday’s showdown with No. 9 Gonzaga.

“It will be a great challenge for us. A great test to see where we’re at,” Hopkins said.

The Eagles committed nine of their 17 turnovers in the first half.

“That’s a killer. We wanted to come in here and have 10 turnovers or less,” Eastern Washington coach Shantay Legans said. “We just have to make sure we push our players to understand how important possession of the ball is. We had 17 turnovers against a good team with a lot of length, but we threw the ball into their hands a lot of times.”

Washington’s run included a pair of highlight-reel dunks from Nahziah Carter, both off perfect passes from Green. The first was a one-handed breakaway slam, the second a well-timed backdoor lob from Green that Carter threw down with two hands. Eastern Washington never got closer than nine in the second half.

Washington has scored at least 70 points in five straight games after not reaching that mark in its first four.

“All we needed was a couple of games,” Green said. “We’ve got it a little bit but it’s still a long season.”

Carter finished with 13 points as the Huskies had six players in double figures. Isaiah Stewart added 12 points and six rebounds before fouling out, and Timmins scored 11, including the first 3-pointer made — and attempted — by the 6-foot-11 center since his freshman season of 2016-17.

Washington: The Huskies decided to tinker with their lineup ahead of Sunday’s matchup against Gonzaga and started Jamal Bey at point guard with Green coming off the bench. Bey started Washington’s previous game against South Dakota but with Green in the lineup as well. The move with Bey at the point didn’t last long as Green entered after about five minutes and Washington was markedly better at both ends with Green running the show. Bey finished with 11 points.

Washington: The Huskies host Gonzaga on Sunday looking to snap a five-game losing streak to the Zags.