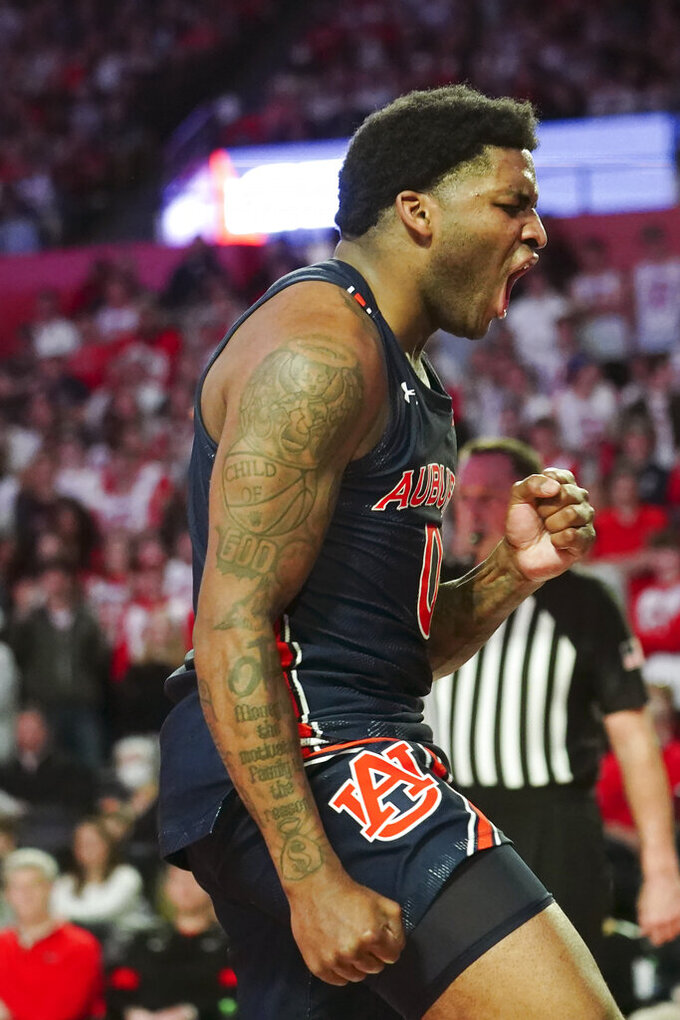 Auburn guard K.D. Johnson (0) reacts after a basket during the first half of an NCAA college basketball game against Georgia, Saturday, Feb. 5, 2022, in Athens, Ga. (AP Photo/John Bazemore) 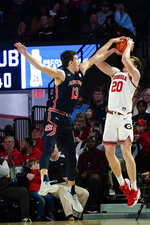 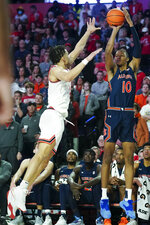 ATHENS, Ga. (AP) — Wendell Green Jr. says a last-second win over the last-place team in the Southeastern Conference just shows the strength of No. 1 Auburn.

Green made a tiebreaking layup with four seconds remaining and the Tigers got past Georgia 74-72 Saturday, extending the nation's longest winning streak to 19 games.

“We’ve just got winners, no matter what the circumstance is,” Green said. “... We’ve got big-time players that make big-time plays.”

“Wendell is a winner,” coach Bruce Pearl said. “I’ll take my chances with him and the ball in a game-winner every day.”

Georgia coach Tom Crean said Green should have been called on a charge as Jaxon Etter was knocked to the floor on the decisive layup.

“Every referee describes to you if a man is retreating like Jaxon was and he’s outside of the cylinder that it’s an offensive foul,” Crean said before pausing, perhaps in an attempt to avoid a fine.

Asked again about the play, Crean said, “I have zero interest in sending one dollar to the SEC ... but I would just say that everything that’s been described to me in drawing charges, I would say that would be textbook.”

K.D. Johnson, who led Auburn with 20 points, said the Tigers' ability to recover after losing a big lead of 15 points shows “we’re becoming a great team and we’re comfortable with any situation.”

Johnson, who transferred to Auburn following his 2020-21 freshman season at Georgia, was loudly booed during pregame introductions.

Green had 19 for the Tigers.

Auburn led 42-30 at halftime before Georgia recovered with 11 unanswered points early in the second half. Two free throws by Jabri Abdur-Rahim gave the Bulldogs their first lead at 58-56.

A drive by Cook gave Georgia a 72-70 lead before Johnson tied the game with a layup.

Kario Oquendo led Georgia with 25 points, including six in an 11-0 run early in the second half that trimmed Auburn's lead to 48-47. Etter's 3-pointer capped the burst, and Pearl called a timeout.

Johnson sank a short jumper following the timeout to end the Georgia streak.

Green, coming off a season-high 23 points in a 100-81 win over Alabama on Tuesday night, had 15 first-half points against Georgia. Despite playing off the bench most of the season, Green led Auburn with his average of 15 points in SEC games before Saturday.

Green threw a pass off the backboard to set up a one-handed jam by Devan Cambridge for a 27-13 lead. The dynamic basket capped a surge where the Tigers made five consecutive shots from the field at a time the Bulldogs were stuck in a 1-for-13 drought.

Auburn: The Tigers are 7-0 on the road, the second-longest road winning streak in school history. The 1957-58 and 1958-59 Auburn teams won eight consecutive road games.

Georgia: The Bulldogs have lost 11 of 12 games, including three straight. Braelen Bridges had 14 points. Etter had 13.

Auburn guard Zep Jasper, normally a starter, was held out with a non-COVID related illness. Green made his fourth start of the season and played 36 minutes, more than his normal time off the bench.

“I felt it in my legs,” Green said. “All my jump shots were short. I couldn’t move like I wanted to, but no excuses, I’ve just got to be better prepared in situations like this.”

Pearl said he should have called a timeout early in Georgia's second-half surge. “I could have cost us the game by not calling timeout,” Pearl said.

Pearl said Jasper is “the best defensive guard in the league, period. Period.”

Oquendo, who added four steals to his game-high scoring, said Georgia played “probably the best” game of its season.

“I can’t be disappointed,” Oquendo said. “We put it all out there.”