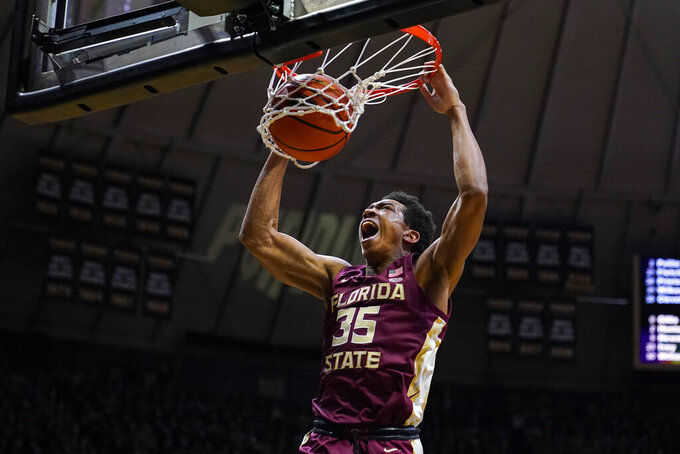 TALLAHASSEE, Fla. (AP) — Leonard Hamilton has always tried to build and win with veteran teams. This season the Florida State coach will win with a new type of veteran.

“We’re fortunate now that every one of our returning veterans, our two-year veterans, they have improved with hard work over the summer,” Hamilton said. “And to my pleasure, the incoming players that we have are farther along than I thought they would be at this stage.”

Hamilton and the Seminoles have built rosters through the years that lean on length, athleticism and depth. They have also featured a blend of seniors as well as transfers and some one-and-done stars. But the Seminoles haven’t had a situation like this, where they return just five players and all of them are beginning only their second season in Tallahassee.

Florida State’s returning five are a good foundation — productive players who are evolving into leaders. They will be complemented by a few transfers and freshmen who could help the program get back to the NCAA Tournament after falling short at 17-14 during an injury-depleted 2021-22 season.

The Seminoles return their top two scorers in guards Caleb Mills (12.7 points) and Matthew Cleveland (11.5 points). Also back is forward Cam’Ron Fletcher, who averaged 6.8 points off the bench last season, as well as center Naheem McLeod and guard Jalen Warley.

Hamilton thinks his unranked team will make an impression quickly.

“When you look back even at the times we’ve won the ACC, ranked in the top 10 at the end of the season, those years we’ve never been preseason in the Top 25,” Hamilton said. “I’m expecting to have a really good year. Hopefully we’ll be a surprise team in the country.”

Florida State lost 54 games to injury in 2021-22, with five of the Seminoles’ top nine scorers forced to watch for large chunks of the ACC schedule. One early question is Jaylen Gainey, a 6-foot-10 transfer from Brown who was the Ivy League’s defensive player of the year in 2020 and ’22. Gainey suffered a preseason injury and could be out an extensive part of the season.

Hamilton was hired at Florida State in 2002 and turned 74 in August. At a time where some of the biggest names in college basketball have opted to retire, notably Duke’s Mike Krzyzewski (now 75) and UNC’s Roy Williams (now 72), Hamilton embraces his role as a mentor and coach.

“I’m happy where I am, my family is happy and we’re expecting bigger and better things,” said Hamilton, whose teams are 78-42 since the start of the 2016-17 season. “Don’t ask me when I’m retiring. As long as I can come out of the locker room and not accidentally go sit on the other coach’s bench because I don’t know where I’m at, I’m going to hang in there.”

Green Jr. shot 6 of 9 from beyond the 3-point arc in UCF’s win over Florida State on Dec. 19, 2020. The 6-foot-5 guard made 208 3-pointers in three seasons at UCF, making 38.8 shots from long range. The early impressions of Green Jr. at Florida State have been impressive: He shot 13 of 30 from 3-point range during a three-game exhibition tour in Canada this summer.

“Just making sure that everyone, the transfers and the incoming guys, that they have the information that they need to play within the system and to be comfortable,” Cleveland said.

Florida State will host preseason No. 1 North Carolina on Feb. 27 and No. 18 Virginia on Jan. 14. The Seminoles will travel to play at Duke on Dec. 31. They will also face five schools that received votes in the presason AP Top 25: Florida, Miami, Virginia Tech, Notre Dame and Purdue.