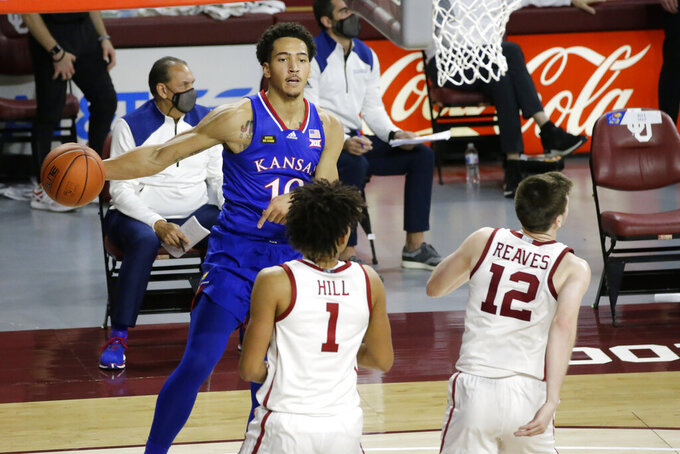 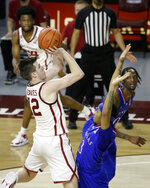 NORMAN, Okla. (AP) — De’Vion Harmon scored 22 points and Oklahoma beat No. 9 Kansas 75-68 Saturday for its second victory this month over a top-10 opponent.

Kansas, which entered the game coming off losses at Oklahoma State and No. 2 Baylor, now has lost three straight games for the first time since February 2013. Marcus Garrett had 21 points and 12 rebounds to lead the Jayhawks, who were limited to two offensive rebounds. Kansas entered the game leading the Big 12 in rebounding margin but the Sooners outrebounded them 36-26.

A 9-2 run by Oklahoma broke open what had been a one-possession game and Austin Reaves’ first basket (after starting with seven misses) put the Sooners ahead 60-54 with 5:53 left.

Kansas pulled within 63-60 when Ochai Agbaji split a pair of free throws with 3:40 left, but Reaves and Umoja Gibson each followed with a driving layup to make it 67-60 and Kansas came no closer than four points the rest of the way.

Reaves, Elijah Harkless, Harmon and Reaves again each hit two free throws in the final 1:36 for the Sooners. Reaves scored 16 points, all in the second half, and made 10 of 11 free throws.

Kansas put Oklahoma in the bonus early in the second half and the Sooners took advantage, making 18 of 22 foul shots after not having a free-throw attempt in the first half. Kansas made 10 of 14 free throws.

Kansas: The Jayhawks went 0-3 during a brutal stretch of road games, but they know no one will feel sorry for them. Coach Bill Self will continue to look for solutions to prevent his team from losing four straight for the first time since 1988-89, Roy Williams’ first season as Kansas coach.

Oklahoma: Oklahoma hasn’t cracked the Top 25 this season, but now is in sole possession of third place in a league with five top-15 teams. With two wins over top-10 opponents this month, the Sooners are looking like a potential NCAA Turnament team.

Kansas: Will play its first home game in 19 days on Thursday, facing TCU.

Oklahoma: Will try to win at No. 5 Texas for a second straight season when visiting the Longhorns on Tuesday.