Horchler carries No. 21 Providence over No. 15 Seton Hall 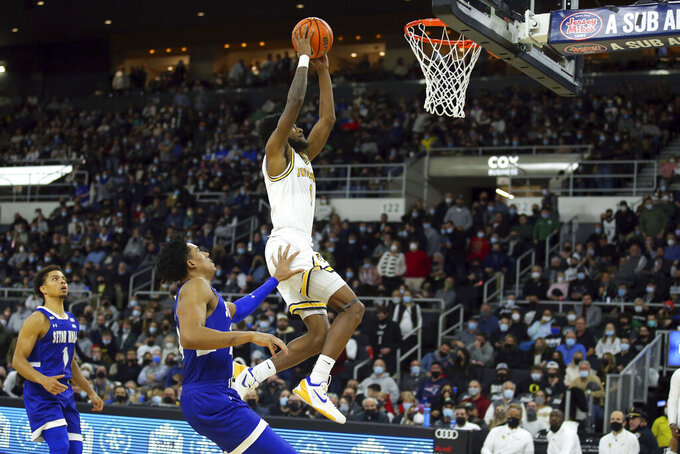 PROVIDENCE, R.I. (AP) — Providence coach Ed Cooley isn’t about to get caught up in the national attention his team is receiving.

Noah Horchler scored 17 points with 13 rebounds, and Nate Watson added 14 points to carry No. 21 Providence to a 70-65 victory over short-handed, 15th-ranked Seton Hall on Wednesday night.

“I think our players are earning it. They deserve it. If you earn it, you deserve it,” Cooley said. “As a coach, you’re just looking forward to the next game. It may help you in some recruiting. That’s just someone’s opinion of what your team is.

“If we do what we’re supposed to do and win enough games, then they’ll be a number beside (us),” he said.

Playing its first game since a victory over Rutgers on Dec. 12, Seton Hall had only eight players in uniform. Five were in COVID-19 protocols, but only one starter, 7-foot-2 center Ike Obiagu, was out.

“It was really different,” Seton Hall's Myles Cale said of the small bench. “We were missing guys that you usually travel with and build that chemistry around. You’re just missing that feeling about the game because they definitely bring that energy. I wish they could have been there, but it’s just the times we’re living in.”

Providence led by nine points at halftime and pushed it to 40-27 on Al Durham’s steal and breakaway jam in the opening minute of the second half.

Seton Hall closed within 57-50 with just under six minutes left on Yetna’s put-back before Providence pushed it back to double digits.

Seeing their first action since beating then-No. 20 Connecticut on the road 11 days ago, the Friars rode the hot 3-point shooting of Horchler to a 36-27 halftime edge.

“The virus is spiking and changing sports every day,” Cooley said. “I’m just glad we were able to play. We beat an undermanned, very talented team.”

Neither team held more than a one-possession lead until Horchler connected from beyond the arc on three straight possessions in just under two minutes during a 15-0 spree that pushed Providence ahead 34-22.

“That’s something we practice every day — step-in 3s,” Bynum said.

Seton Hall: The Pirates’ season had been derailed by COVID-19 before Wednesday, so it’ll be interesting to see if they can regain the form that led to them climbing in the AP Top 25 before three games were canceled. ... The school announced before the game that reserve guard Jahari Long had surgery on his right knee on Dec. 20 and will miss the remainder of the season.

Providence: If experience means anything, the Friars could be in for a strong season. They have a ton of it and some well-balanced scoring, too. Their starting lineup consists of four graduate students and a senior. Three of the starters are averaging double figures and a fourth came in at 9.9 points per game.

Despite having an extremely limited bench on Wednesday, Seton Hall will likely drop a bit in next week’s poll unless the Pirates have a solid showing in their conference home opener on Saturday. Providence almost certainly will climb barring a bad showing over the weekend.