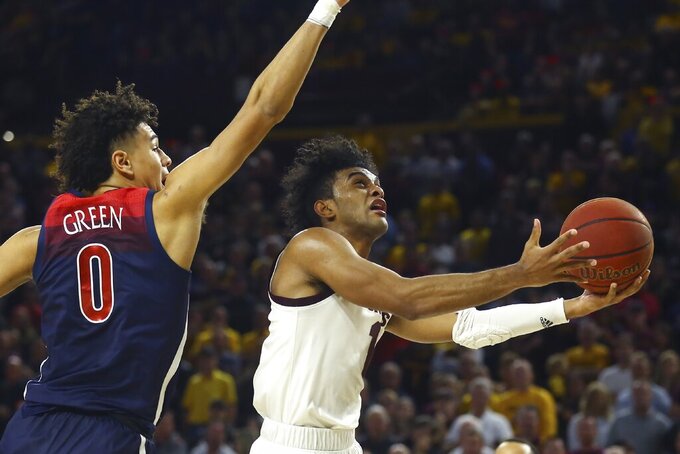 FILE - In this Jan. 25, 2020, file photo, Arizona State guard Remy Martin, right, drives past Arizona guard Josh Green (0) to score during the second half of an NCAA college basketball game in Tempe, Ariz. Arizona State is the Pac-12's highest-ranked team in the AP preseason poll at No. 18, gets Martin back and has arguably the best recruiting class in program history. (AP Photo/Ross D. Franklin, File)

The Pac-12 expected to get six, maybe even a record-tying seven teams, into last season's NCAA Tournament.

The conference's hopes, like those of leagues and teams across the country, were dashed when March Madness was canceled due to the coronavirus pandemic.

As the pandemic-delayed 2020-21 season is set to start, the Pac-12 is again in position to have one of the toughest, deepest conferences in college basketball.

“A year ago, overall we had one of our best seasons as a conference,” Arizona coach Sean Miller said. “This year, I think it might be the strongest year in my 12 years in the Pac-12 because from top to bottom, it's so strong and we have so much returning experience.”

Oregon has been the Pac-12's gold standard, winning four regular-season and three conference tournament titles the past five years. The Ducks lost Pac-12 player of the year Payton Pritchard, but Dana Altman may field an even better team this year with a mix of veterans, transfers and another strong recruiting class.

Oregon is ranked No. 20 in The Associated Press preseason poll.

No. 22 UCLA made a push for a surprise NCAA Tournament berth in its first season under Mick Cronin and has most of that team back.

Arizona State is the conference's highest-ranked team in the AP preseason poll at No. 18, gets Remy Martin back and has arguably the best recruiting class in program history.

Stanford lost Tyrell Terry to the NBA draft, but returns four starters. The Cardinal also pulled off a recruiting coup by landing Ziaire Williams, one of the nation's top recruits.

Miller has reloaded his roster with six talented foreign players to replace the three talented freshmen who left for the NBA after last season.

Freshman Evan Mobley should help Southern California overcome the loss of Onyeka Okongwu to the NBA and could lead the Trojans into the NCAA Tournament.

Utah has one of the conference's best players in Timmy Allen. Same thing for Colorado with McKinley Wright IV.

Washington has plenty of experience, but a couple of big holes to fill with Isaiah Stewart and Jaden McDaniels gone after one season.

It should be a wild, competitive season in the Pac-12 and, possibly, end with another big batch of NCAA Tournament-worthy teams.

Arizona State got a huge boost when Martin opted to return to the desert instead of leaving for the NBA. He's the Pac-12's top returning scorer after averaging 19.1 points per game last season and is one of the nation's most dynamic guards.

Utah got a similar lift when Allen, who averaged 17.3 points and 7.2 rebounds last season, decided to return.

Wright seems like he's been at Colorado for 10 years and continues to be one of the league's best all-around guards.

California was one of the nation's worst offensive teams last season, but guard Matt Bradley was one of the Pac-12's best scorers, averaging 17.4 points.

Oregon's Will Richardson had a solid sophomore season, averaging 11 points, 3.7 rebounds and 2.3 assists while shooting nearly 47% from 3-point range. Now that Pritchard has graduated, Richardson will have a bigger role for the Ducks, which could lead to higher numbers.

Oregon State senior guard Ethan Thompson has been a proven scorer for several years in Corvallis, Stanford's Oscar da Silva can dominate in the post and UCLA's Chris Smith creates all kinds of matchup problems with his length and athleticism.

Washington State point guard Isaac Bonton had a productive junior season, averaging 15.3 points and 4.0 assists per game. Expect those numbers to go up in his final season with the Cougars.

The Pac-12 lost several star players but has several newcomers who could quickly fill their roles.

The 6-11 Mobley is projected as an NBA lottery pick, an active, athletic big man who should give USC a dominating inside presence.

The 6-foot-8 Williams is the highest-rated recruit in Stanford history and should combine with da Silva to give the Cardinal one of the conference's most talented frontcourts.

Josh Christopher should have an immediate impact as the highest-rated player in Arizona State's stellar recruiting class. The 6-5 guard can fill it up in a variety of ways.

Arizona has a number of freshmen who could play big roles, but a trio of transfers could have the biggest impact.

Former Georgetown guard James Akinjo was the Big East freshman of the year and former Seattle University guard Terrell Brown is another player who can light it up. Nevada transfer Jordan Brown will give the Wildcats heft inside.