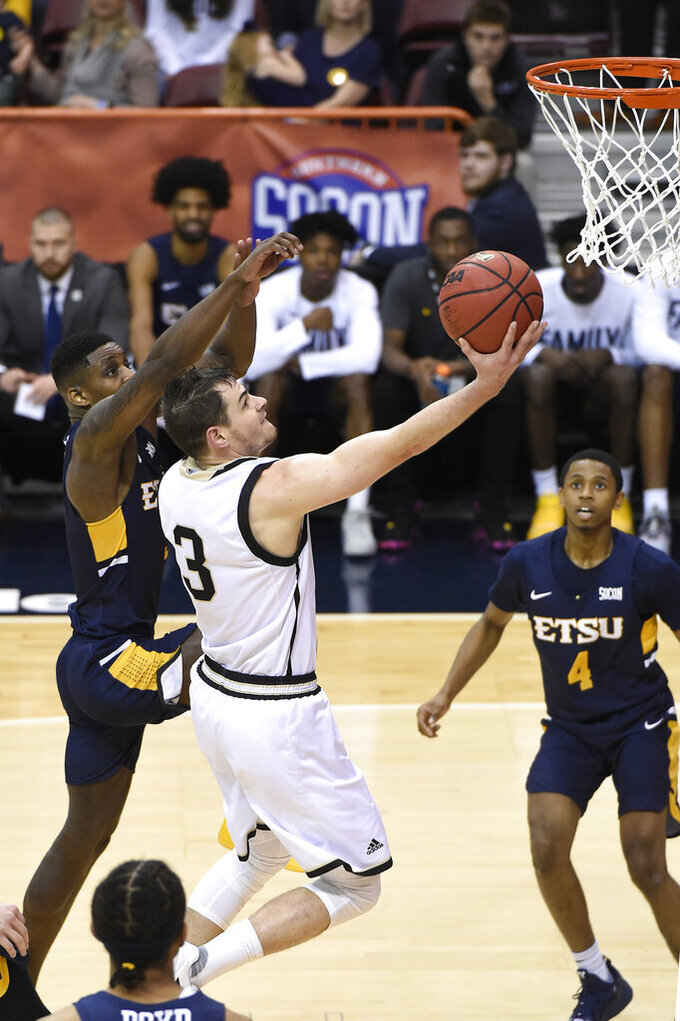 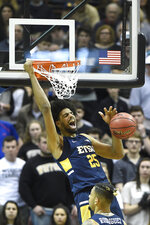 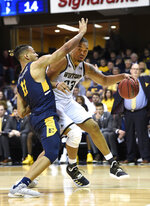 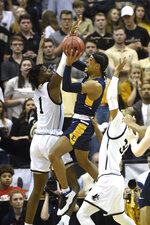 ASHEVILLE, N.C. (AP) — As Fletcher Magee ran off a screen, grabbed a pass and with his back to the basket spun around in midair and swished it from 27 feet away, East Tennessee State coach Steve Forbes turned to his assistant coaches and shook his head.

"It's comical that he can be looking the other direction and make a 3," Forbes said of Wofford's 3-point shooting phenomenon.

After four years, Forbes still hasn't figured out how to stop the player who has more career 3-pointers (498) than any active player in Division I.

Magee scored 26 points on 6-of-7 shooting from beyond the arc, power forward Cameron Jackson added 20 points and seven rebounds, and No. 22 Wofford beat East Tennessee State 81-72 on Sunday to advance the Southern Conference Tournament championship game. The top-seeded Terriers (28-4) will play UNC Greensboro on Monday night.

Magee, the Southern Conference player of the year, made 10 of 14 shots from the field including two remarkable 3s on which he twisted almost 180 degrees in the air to make the shot.

He needs seven more 3-pointers to pass Travis Bader of Oakland to become the Division I career leader.

Wofford coach Mike Young said when Magee starts shooting like he did on Sunday, there is only one strategy.

"Load him up," Young said. "That's what we say, load him up. I think it was Hubie Brown who said, 'You run special plays for special players.'"

Young and the Wofford faithful have seen Magee pull off the seemingly impossible for four seasons.

Magee, though, said he never really surprises himself because he works on those shots daily at the team's practice facility in Spartanburg, South Carolina.

"Believe it not, I actually practice every shot I made today," Magee said. "You can't fully simulate having a long athletic defender on you, but you can simulate coming off and turning your body a certain way and pulling it quick or shooting it higher because a guy is about to block it."

Between Magee and Jackson, Wofford had an unstoppable inside-out punch.

Jackson, a 6-foot-8 senior forward, finished 9 of 12 from the floor and was dominant in the low post in the second half, when he took advantage of a size mismatch. Wofford went to Jackson on four straight possessions at one point, and he responded with big baskets.

Throw in some big 3s from Nathan Hoover, who had 10 points, and the strong inside play of Keve Aluma and Chevez Goodwin, who were a combined 6 of 6 from the field for 12 points, and the Terriers were too much for the young Buccaneers.

But it was Magee's game — and his circus shots — that Forbes will remember.

"I have seen this for four years and I'm sick of it," Forbes said. "I'm glad Magee and Cameron Jackson are out of here. Hopefully the nation will see that. I don't think the nation quite understands what we understand in this league — how hard he is to guard."

SOCON TEAM OF THE DECADE

The Terriers are normally a good free-throw shooting team, but they struggled on Sunday at the line, making just 7 of 18. Young said the team will work on free throws Monday afternoon before the championship game.

ETSU: The Buccaneers forced 17 turnovers with their quickness, but simply didn't have the bodies to defend Jackson in the low post and failed to reach the tournament finals for the first time in four years. However, ETSU returns every key player and should be a contender next season.

Wofford: The Terriers have won 19 straight games. Even if the Terriers lose to UNC Greensboro, it's hard to imagine them not making the NCAA Tournament given their record and ranking. They have the balance to make a run in the NCAAs.

ETSU: Will await word on a possible NIT bid. Forbes said he doesn't think his team will get a bid but would like to continue playing in another tournament to gain experience.

Wofford: Faces UNC Greensboro on Monday night. The Terriers beat the Spartans by 30 and 29 points this season.