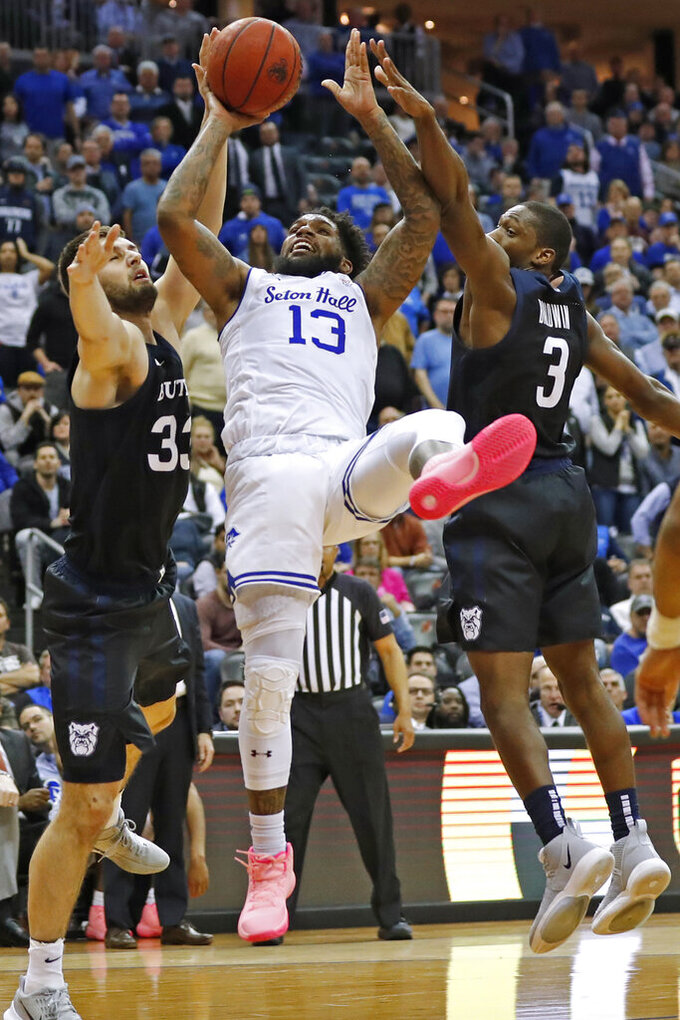 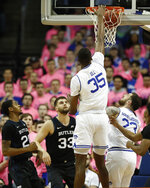 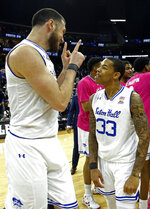 NEWARK, N.J. (AP) — With the game tied and less than a second to play, Seton Hall coach Kevin Willard had a feeling Butler would be looking for Pirates' leading scorer Myles Powell to get the ball.

So he called a play Sandro Mamukelashvili, one he had seen a couple of months ago watching the Sacramento Kings on television in the wee hours of the morning.

Mamukelashvili hit an off-balance shot in the lane at the buzzer to give No. 16 Seton Hall a stunning 74-72 victory over No. 21 Butler on Wednesday night.

The game-winning shot came on an inbounds play after the officials reviewed a missed shot by Quincy McKnight and added two tenths of a second, putting 0.6 on the clock.

“The play was to throw it up and have Sandro go get it and hope for a miracle,” Willard said.

Mamukelashvili, who scored 11 of his 15 points in the second half, said he had time to briefly catch the inbounds pass by McKnight and put up it, where it hit the rim and rolled in.

“I don't know if it was difficult or not. I just shot it," said the junior from the Republic of Georgia. “At that moment I just wanted to score the basket. Probably it is a difficult shot, but Quincy just threw it so good it made it look easy.''

After being mobbed by his teammates, Mamukelashvili went to the corner and hugged his father, Zurab, who had made the trip overseas to see his son for the first time since May.

“It's a cancer day and my father is a cancer survivor so it was just great, great,'' the power forward said after Seton Hall (19-7, 11-3) ended a two-game losing streak.

“Each and every night it's going to come down to one or two possessions," Butler coach LaVall Jordan said of Big East games. “You know that. It's my third year and it hasn't changed."

Jordan said he brought in 6-foot-10 John-Michael Mulloy to add more size to his lineup, thinking the play would go to 7-foot-2 Romaro Gill. It went to the kid known as ‘Mamu'.

“He just made a great shot," Jordan said.

McKnight led the Pirates with 18 points. Powell had 16 and Gill 15 points.

Kamar Baldwin had 20 to lead the Bulldogs, while big man Bryce Golden added 17 points before fouling out with 2:19 to play.

Jordan Tucker started the run of Butler threes and McDermott answers four free throws by McKnight with his threes to set up the final play.

Butler hit nine of its first 15 shots and opened a 22-12 lead on a 3-pointer by Golden midway through the first half.

Seton Hall, which was limited to 33% shooting from the field in the first 20 minutes managed to get within 34-28 at the half on two free throws by Gill, who led the Pirates nine points.

Butler: Since opening 15-1, the Bulldogs are 4-7 and may fall out of the Top 25. They are an NCAA Tournament team and Baldwin is fun to watch. Still one win from their 20th 20-win season in 24 years.

“I was proud of our guys for their response," Jordan said of the late comeback. “Never thinking it was over, believing the whole time and stepping up and making big plays.”

Seton Hall: Got back on track after losses to No. 15 Creighton and Providence. They are 4-3 against ranked teams and remain in first place in the Big East.

Butler: at No. 15 Creighton on Sunday.

Seton Hall: Faces St. John's at home Sunday afternoon, and Willard does not expect a hangover from this exciting win.

“It's the end of February and we are in first place in the league,” he said. "I don't have to worry about that. I'll make sure they are ready and I think they understand the opportunity they have.''