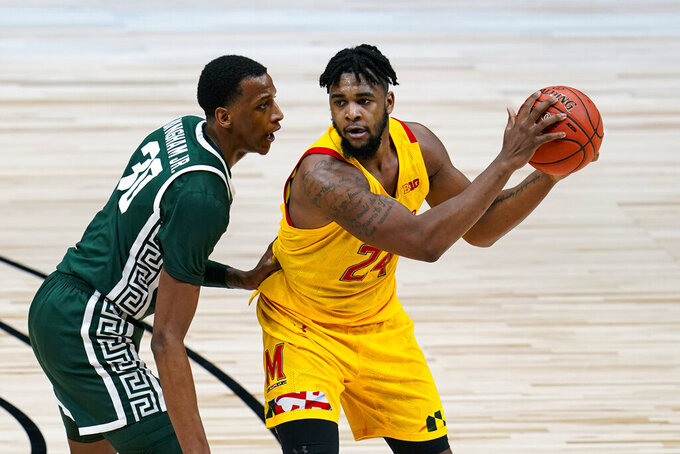 The eighth-seeded Terrapins (16-12) gave their NCAA Tournament hopes a big boost but now face top-seeded and No. 4 ranked Michigan in the quarterfinals on Friday. The Wolverines won both regular-season matchups by a combined 35 points.

Maryland erased a 12-point first-half deficit to lead 34-30 at halftime and scored the first eight points of the second half before the Spartans ended a field-goal drought of nearly 12 minutes spanning both halves. Maryland led by as many as 19 with seven minutes remaining in the game.

Ayala made 10 of 11 free throws and grabbed nine rebounds. Wiggins scored 12 of his points in the second half. When Maryland beat Michigan State 73-55 in their only regular-season meeting, Ayala had 22 points and made all 13 of his free throws with the Terrapins sinking 23 of 24.

Maryland finished 20 of 28 at the line on Thursday to the Spartans' 9-of-18 and outscored Michigan State 27-2 off 18 turnovers.

Ayala scored 10 points, eight from the free-throw line, to lead a 16-4 run and grab the lead in the first half. His 3-pointer as time ran out made it a four-point edge. Maryland made 15 of 16 free throws in the first half.