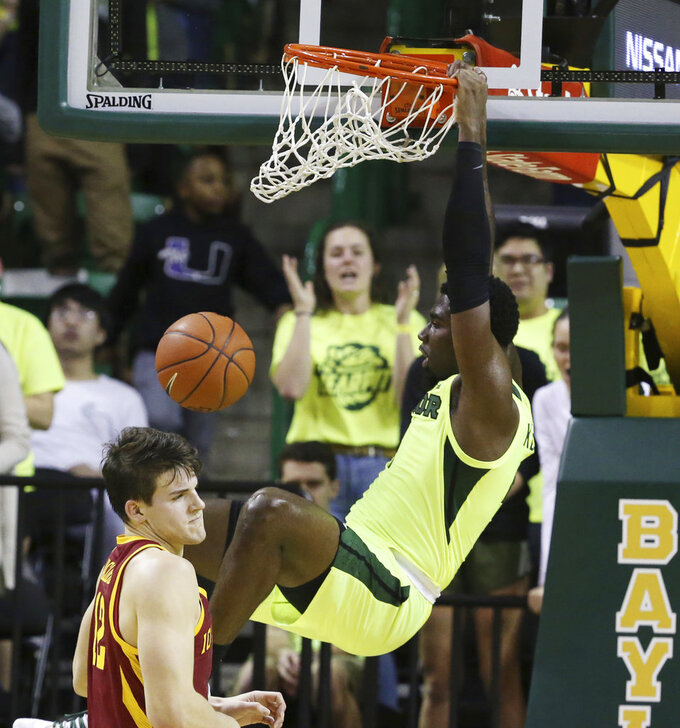 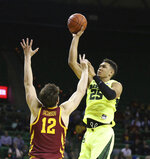 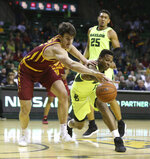 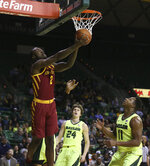 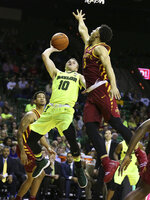 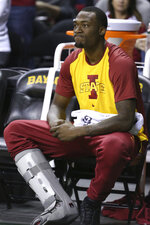 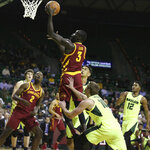 WACO, Texas (AP) — Makai Mason is getting more aggressive on the floor for Baylor, wanting to take shots and chasing after loose balls.

Mason scored a season-high 25 points, including five free throws in the final 38 seconds, and the Bears held on for a 73-70 victory over No. 20 Iowa State on Tuesday night.

"Yeah, it's definitely been a process," said Mason, the first graduate transfer ever to play at Baylor. "But, every game, I've felt like I've been a little more comfortable. Just learning our system as well."

"It was a tough loss, this is a loss that should bother us a lot," Iowa State coach Steve Prohm said.

"We just wanted to build off what we did on Saturday and kind of getting off to a good start in the league," Cyclones forward Michael Jacobson said. "Yeah, it's just disappointing for that reason."

Mason played only one game the past two seasons at Yale because of foot issues, and missed his first three games at Baylor with a sprained right ankle. His 25 points are still shy of his career-high 31, scored for Yale against Baylor in the 2016 NCAA Tournament.

"I'm fine with whatever he does, point-wise, this year," Baylor coach Scott Drew said with a smile.

Devonte Bandoo made two free throws with five seconds left for Baylor (9-5, 1-1), and Iowa State had one more shot to tie the game but Nick Weiler-Babb's defended 3-pointer from about 30 feet along the right sideline wasn't even close .

Tristan Clark added 16 points for Baylor while Bandoo had 13.

Marial Shayok had 19 points to lead Iowa State. Lindell Wigginton and Jacobson had 11 each.

Mason made a tough short jumper with 1:48 left to tie the game at 66. After his tiebreaking free throw before missing another with 38 seconds left, King McClure grabbed the offensive rebound. That set up two more free throws by Mason.

There was also Mason's 8-0 run earlier in the second half. He made a 3 with 9:29 left for a 54-52 lead, then after an Iowa State miss made a long 3 and stood with his right arm still in the air while watching the shot go in the basket. Mason then had a long rebound and fastbreak shot, though it only counted two points since his toe was on the line.

Iowa St.: After their most lopsided win over Kansas in 46 years, this was a tough loss for the Cyclones. Iowa State wiped out an eight-point halftime deficit with a 15-5 run to start the second half in which Shayok had eight points. But the Cyclones never led by more than two points after halftime.

Baylor: Bandoo had eight points, including two 3s, as Baylor closed the first half with a 22-7 run to turn a seven-point deficit into a 38-30 lead. ... The Bears have won the last six times Iowa State has visited Waco.

Iowa State was finally healthy as a team going into the Big 12 play. But the Cyclones know have another injury to deal with. Cameron Lard sprained his right ankle and sat on the bench after halftime with a protective boot on his foot. Prohm said he didn't know enough yet to comment on the status of the 6-foot-9 forward.

ANOTHER NIGHT IN THE BIG 12

Baylor bounced back from a conference-opening 85-81 loss at TCU when a late rally came up short.

"Another Big 12 game. We've played two of them and both have come down to the last possession," Drew said. "At the end of the day, that's what the best league in the country gives you, no off nights."

Iowa State, which is 8-0 at home this season, is back at Hilton Coliseum to play Kansas State on Saturday.

Baylor plays its second straight home game against a ranked opponent when No. 7 Kansas is at Waco on Saturday.