Miami's Moore to face former team in his hometown of Chicago 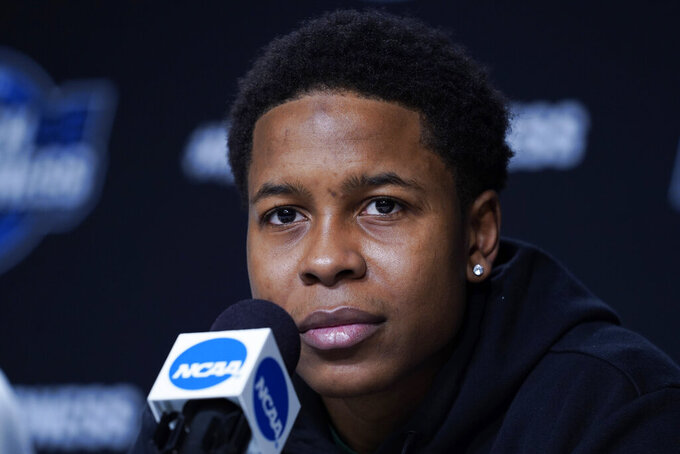 CHICAGO (AP) — Charlie Moore recalled going to Bulls games growing up in Chicago and watching another kid from the Englewood neighborhood on the city's West Side electrify the hometown crowd.

Derrick Rose might have been No. 1 among point guards, just like his uniform number at the time.

Moore didn't ignore the man with the statue in the atrium, either. And now, he has a unique opportunity to play in Michael Jordan's old home.

Tenth-seeded Miami (26-10) faces top-seeded Kansas (31-6) in the Midwest Region final at the United Center on Sunday, when Moore has a chance to help Miami earn its first trip to the Final Four against one of his former teams and in his hometown.

“It's been a unique experience with me,” said the sixth-year senior point guard, who is with his fourth team. “But going through what I went through, going from college, to college, I’ve learned a lot. I don’t regret anything. It made me who I am today as a person and I’m pretty happy with who I am.”

Miami Coach Jim Larrañaga said it's not about Moore facing the Jayhawks: “This is about our team versus their team. And Kansas is a great basketball program.”

Maybe. But Moore gives the story an extra twist or two.

A two-time state champion at Chicago's Morgan Park High School and a former Mr. Basketball in Illinois, the 24-year-old Moore has followed a winding path.

He initially committed to Memphis, only to wind up at California for the 2016-17 season. He averaged more than 12 points and started 34 games as a freshman. Coach Cuonzo Martin left for Missouri, and Moore opted to transfer to Kansas so he could be closer to his family in Chicago with his dad, Curtis, recovering from a 2015 stroke.

“He was a great teammate," Kansas star Ochai Agbaji said. "He was there my freshman year. I was only there with him for one year until he transferred out. But he was a great teammate, a really good passer, really aggressive and he can also score. And just his IQ for the game, his feel for the game I think is something that’s kind of unheralded, but he’s a really good all-around player.”

Moore then decided to transfer to DePaul, with his dad's mobility limited and his mom needing to work. He starred for the Blue Demons for two seasons.

When the NCAA granted an extra year of eligibility because the pandemic-shortened 2020-21 season, Moore put his name in the portal. It didn't take Larrañaga, who recruited him out of high school, long to text.

Moore wasn't able to make an on-campus visit because of the pandemic, so they met on video. And with his father's encouragement, Moore headed south.

“I knew I was going to come play with great teammates out there in Florida," Moore said. "So that made it easy.”

It didn't take long for him to bond with Larrañaga.

“I gave him the ball and said, ‘Look, you need to be our quarterback,’" the coach said. “Now, we have another freshman point guard but you’ve got the experience. I have tremendous confidence in you.”

Miami is back in the NCAA Tournament after three straight losing seasons. The Hurricanes won just 10 games last year and had never advanced past the Sweet 16 before knocking off Iowa State on Friday night.

Moore has played a major role in the turnaround, averaging 12.6 points and 4.7 assists, and was particularly good in the first two NCAA games. He had 16 points and four steals against USC and almost delivered a triple-double against Auburn (15 points, nine rebounds and eight assists). He also had nine assists against Iowa State.

“I think Charlie may have the best vision of anybody left in the tournament,” Kansas coach Bill Self said. “He sees a lot of things. He did with us. He didn’t play a lot when he was with us and, for one year, and just in large part because we had two NBA players playing guard slots then.

"But Charlie’s talented. He’s clever. He can get his own shot. He can certainly create for others. And he’s crafty. He’s very crafty.”