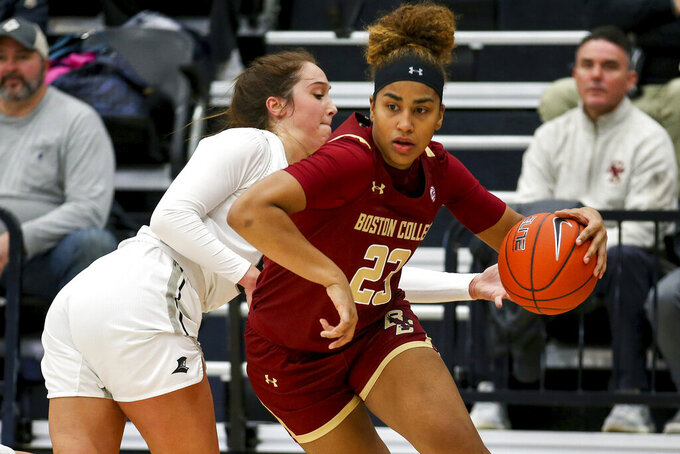 FILE - Boston College's Milan Bolden-Morris (23) avoids a steal attempt by Providence's Kyra Spiwak (5) during an NCAA women's basketball game on Nov. 17, 2019 in Providence, R.I. Bolden-Morris will be the first woman to become a football graduate assistant coach for a Power Five football program and in the Big Ten. Michigan announced her hire Tuesday, March 15, 2022. Bolden-Morris is a Florida native who played three seasons at Boston College before transferring as a graduate student to Georgetown. (AP Photo/Stew Milne, File)

The school announced her hire on Tuesday. The former college basketball player, who started for Georgetown this past season, will start June 1 and work with quarterbacks.

She is believed to be the first woman to be a graduate assistant football coach at a Power Five school since Carol White worked with the kickers at Georgia Tech in the late 1980s.

The position is considered entry level for those pursuing a career in college coaching.

“I have always believed in providing opportunities for individuals who are passionate about football and Mimi is someone who has shown that drive to become a football coach,” Michigan coach Jim Harbaugh said in a statement. ”We had some great conversations and I came away extremely impressed with her desire and ideas for coaching, and for making us better as a team."

He added that the team “can’t wait to see the new perspective she brings."

Bolden-Morris is a Florida native who played three seasons at Boston College before transferring as a graduate student to Georgetown. She played guard and led Georgetown in scoring at 12.3 points per game.

“The opportunity to be the first female GA in the Power 5, especially the Big Ten, is an absolute honor,” Bolden-Morris said in a statement. “It speaks volumes to the efforts that Coach Harbaugh has made to create an environment of inclusion. These opportunities have been an anomaly for a Black woman until recently.

"Growing up watching my dad coach my brother, it has always been my dream to be a part of a football team in some form, so this opportunity is allowing me to live out a dream of mine, especially working with quarterbacks.”

Graduate assistants usually receive a stipend and have their tuition covered by the school.