No. 1 Gonzaga comes alive late to race past Georgia St 93-72 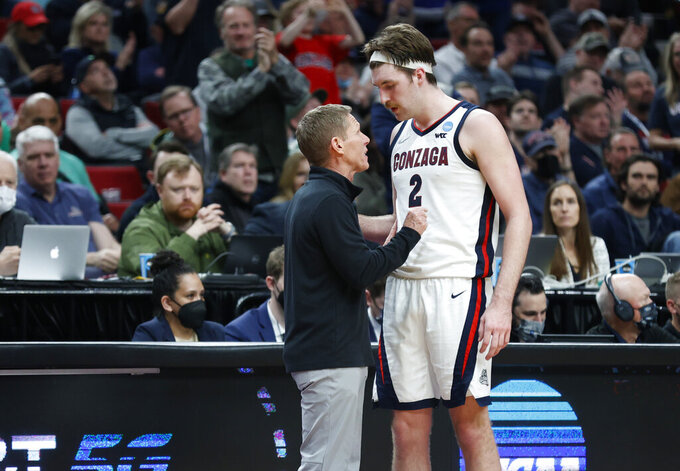 PORTLAND, Ore. (AP) — Gonzaga coach Mark Few has seen plenty of No. 16 seeds in the first round of the NCAA Tournament. When he watched video of Georgia State, the longtime Bulldogs' coach didn't see a team that fit that profile.

Few turned to be correct. Gonzaga spent 30 minutes struggling to create any separation against the 16th-seeded Panthers before pulling away late for a 93-72 win on Thursday.

“Once we started really breaking them down, I kept telling people that’s not a 16 seed,” Few said after Gonzaga won its 13th straight first-round game in the NCAAs. “I think they showed it tonight. Georgia State gave us quite a fight.”

The Bulldogs eventually had too much size and skill for the Panthers. Drew Timme scored 22 of his 32 points in the second half, making up for a sluggish start by the Zags and a long stretch of the first half when the tournament's No. 1 overall seed couldn't make a basket.

Even when Gonzaga’s offense kicked into gear after halftime, the Panthers didn't fold.

The eventual overwhelming surge from the Bulldogs finally arrived with about 10 minutes to go. Gonzaga went on a 24-1 run, turning a four-point game into the blowout that was expected. The Zags will face the West Region's No. 9 seed, Memphis, in the second round on Saturday.

Timme was the catalyst, topping 30 points for the fifth time in his career while also grabbing 13 rebounds. Chet Holmgren, the Zags' 7-foot freshman, added 19 points, 17 rebounds and seven blocks.

“My guys had my back and the coaches believed in me. I just had confidence from them,” said Timme, who was 3 of 7 shooting and 4 of 9 at the foul line in the first half. “It’s really reassuring. It really can help give you a boost when you get a little down on yourself.”

Corey Allen led Georgia State (18-11) with 16 points, and Jalen Thomas and Kane Williams both added 12. The Panthers trailed by two at halftime despite shooting 29% and were down 62-58 with 10 1/2 minutes left. From there, they watched Gonzaga put together the kind of spurt that's made it the favorite to win its first national title.

Georgia State, the Sun Belt Conference champion, came in with a 10-game winning streak and one loss since Jan. 27.

“I hate for these guys that the score really isn’t indicative of how the game was really played,” Georgia State coach Rob Lanier said. “I’m really proud of these guys, not just for the effort tonight, just for their overall contributions to our program.”

Gonzaga led 64-58 when Holmgren scored on a putback and Nolan Hickman blocked a shot and scored in transition. Six points from Timme quickly pushed the lead to 16.

By the time Georgia State scored again with five minutes left, the Panthers trailed by 22 and the dream of the second 16-over-1 upset in tournament history had fizzled.

“We just needed to come back and be who we are in the second half, and I think they did a great job with that,” Few said.

Even when Timme scored 10 points in the first six minutes of the second half, the Panthers hung around thanks to the shooting of Justin Roberts, Williams and Allen.

Eventually, the Panthers started missing and Gonzaga’s stars kept scoring. Foul trouble also caught up with Georgia State as Kaleb Scott committed his fifth foul with 10:26 left, one of three interior players to foul out for the Panthers.

"We gave them a lot of easy buckets in the paint and a lot of fouls,” Williams said. “Those fouls kind of bit us. We just couldn’t overcome after that.”

Georgia State: Making their fifth NCAA Tournament appearance, the Panthers simply didn’t have the interior bodies to match the Bulldogs. It didn’t help when forward Eliel Nsoseme went down clutching his left knee in the latter portion of the first half. Nsoseme was down on the court for several minutes slapping the floor and yelling in discomfort before eventually walking to the locker room. Lanier said he didn't know how serious the injury but was told there was no chance Nsoseme could have returned.

Gonzaga: Foul shooting will be something to watch for the Bulldogs. Gonzaga was 9 of 19 in the first half and 16 of 30 for the game. The Zags had been solid for most of the season, shooting 73% as a team.

Gonzaga will face a dangerous Memphis team that bounced back from a rough start to the season.