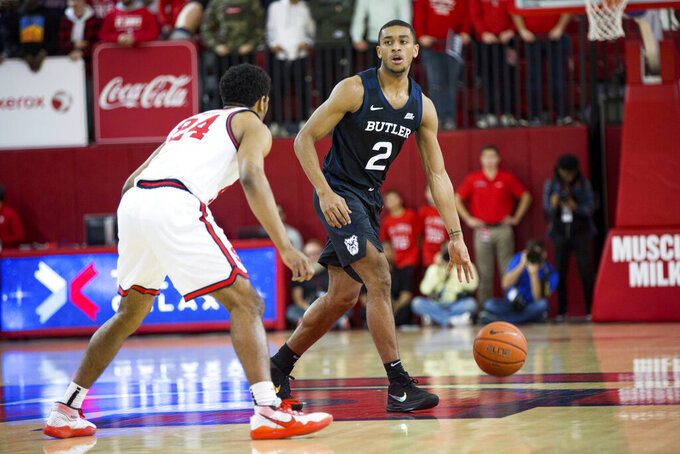 NEW YORK (AP) — With No. 11 Butler trailing by one point in the final minute, Christian David positioned himself in the right corner, not sure the ball would come his way.

Kamar Baldwin passed it over, and David put up the most important shot of his career.

David hit the go-ahead 3-pointer with 43 seconds remaining and Butler rallied after blowing a 23-point lead to beat St. John’s 60-58 Tuesday night in the Big East opener for both teams.

“Probably the biggest shot I’ve made so far,” said David, who is a 24% 3-point shooter in his career. Those were his only points in the game — he came in averaging 3.4 points per contest.

David was open after Aaron Thompson got an offensive rebound behind the 3-point line. Thompson quickly fed the ball to Baldwin, who faked a shot and dished to David. He released the shot before St. John’s Greg Williams Jr. could come over to defend.

“He’s prepared himself for a moment like that and worked like crazy this summer,” Butler coach Lavell Jordan said. “It was a huge moment for him and us.”

Butler (13-1, 1-0) trailed 58-53 when Raheem Dunn hit an uncontested layup with 3:08 left, but then the Bulldogs clamped down defensively. Baldwin’s jumper made it 58-57 with 2:01 remaining, and following a series of wild sequences at the rim, David delivered.

After David’s clutch shot, Butler got two defensive stops to seal its fourth straight win on a night when it committed 24 turnovers.

Dunn missed a layup with 19 seconds remaining and LJ Figueroa missed a 3-point try with one second left.

“They made plays and we dug a hole,” St. John’s coach Mike Anderson said after his team missed its final five shots “We got back in and that’s the most encouraging thing. We were right there against a very good basketball team.”

Before overcoming its collapse, Butler dominated the final nine-plus minutes of the first half. Baldwin and McDermott combined for 18 points in a 23-2 run that gave the Bulldogs a 37-16 halftime lead.

Butler: Butler continued to be stout defensively, playing aggressive to hold another opponent under 60 points. The Bulldogs have held 10 of their first 14 opponents under 60.

St. John’s: It was a tough night for leading scorer Figueroa, who picked up his fourth foul early in the second half and sat for most of the Red Storm's comeback. He went scoreless in 13 minutes and it was the first time at St. John’s Figueroa did not score.

Baldwin injured his right ankle early in the first half but returned after sitting for about five minutes. He was not on the floor for a long stretch when St. John’s came back and was in a walking boot after the game.

St. John’s second-leading scorer Mustapha Heron was held out of his third straight game with a sprained right ankle. Heron was injured in the final minutes against Brown on Dec. 10 going for a rebound.

St. John’s visits Xavier on Sunday, which lost at Villanova in its conference opener.