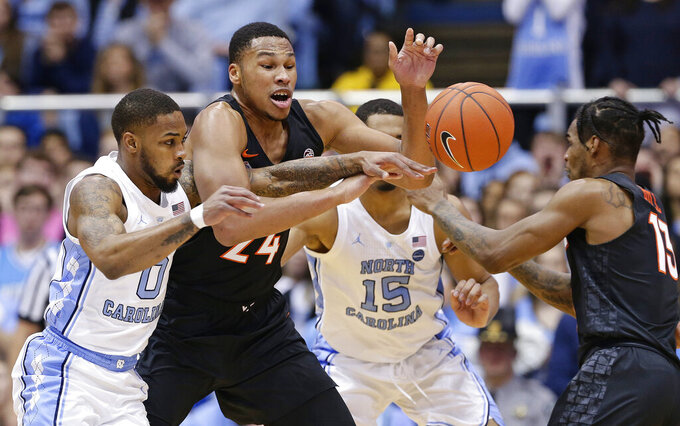 CHAPEL HILL, N.C. (AP) — North Carolina went from being unable to hit a 3-pointer to seemingly unable to miss. And its touted freshmen rolled to big nights against a highly ranked Atlantic Coast Conference opponent.

This is more what coach Roy Williams envisioned — or hoped for, anyway — from his 11th-ranked Tar Heels.

Freshman Coby White scored 27 points while UNC hit a season-high 16 3-pointers to beat No. 10 Virginia Tech 103-82 on Monday night, cracking the 100-point mark for the first time in league play.

Fellow rookie Nassir Little added a season-high 23 points for the Tar Heels (15-4, 5-1 Atlantic Coast Conference), who struggled out of the gate to fall behind by nine while making just 1 of their first 12 3s. But it wasn't long before just about everything started falling from behind the arc, an avalanche that sparked a game-turning 20-0 run that pushed UNC to a 45-31 lead by halftime.

"I've seen us play like that but not in enough spurts this year in games," Williams said.

It was the Tar Heels' best showing since scoring 103 points in a December home win against No. 4 Gonzaga. There have been clunkers since, though namely suffering the worst home loss in 16 seasons under their Hall of Fame coach against Louisville on Jan. 12.

"I think the key factor for us was we had won two games and then played terribly against Louisville," Little said. "And we didn't want that to happen this time. ... We just wanted to keep going, keep that energy going, keep that win streak going."

Ahmed Hill scored 20 points for the Hokies (15-3, 4-2), who made 6 of 7 3-pointers in a fast start only to end the half by going nearly 6 minutes without a basket while dealing with foul trouble.

"I thought we tried to manage it the right way," Hokies coach Buzz Williams said of the 20-0 run. "Obviously we didn't get any stops. It was kind of a mix-match group that we were trying to survive with, and offensively we were for sure out of sorts.

"It kind of compounded on us fairly quick over those last four minutes."

Virginia Tech: This was the Hokies' second road game against a ranked opponent in the past week. Things went poorly in the first at No. 3 Virginia, with the Hokies struggling at both ends in a woeful first half en route to a 22-point loss. Williams sounded happier with his team's response this time around.

"I think collectively we feel different tonight in the locker room than we did (after the Virginia loss)," he said, adding: "The scores are similar but I think the energy and the effort and the fight tonight was different."

UNC: The Tar Heels were coming off a win at Miami that pushed them to 3-0 on the road in ACC play, then shook off that slow start by putting five players in double figures — even with season-leading scorer Cameron Johnson managing just eight points.

"It just shows how deep our team is," White said. "Our depth is crazy."

The fouls added up in the first half for the Hokies. First starting point guard Justin Robinson headed to the bench with his third foul on a charge at the 9:52 mark, then season-leading scorer Nickeil Alexander-Walker picked up his third with 1:26 left in the first half.

Hokies reserve P.J. Horne (4.8 points) didn't play, with Buzz Williams saying he would be out indefinitely due to an undisclosed injury.

This story has been corrected to show UNC's game at Georgia Tech is Jan. 29, not Saturday.