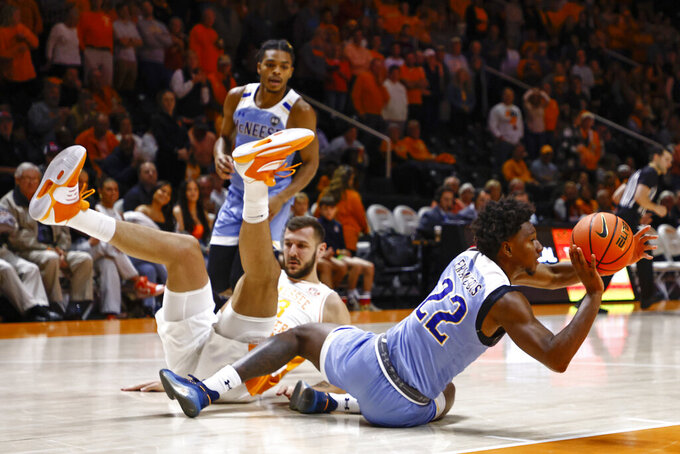 McNeese State guard Harwin Francois (22) passes the ball off as he battled it away from Tennessee forward Uros Plavsic during the first half of an NCAA college basketball game Wednesday, Nov. 30, 2022, in Knoxville, Tenn. (AP Photo/Wade Payne) 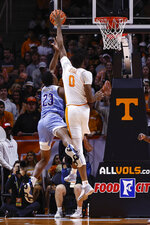 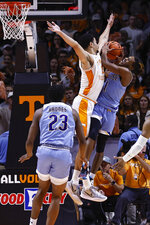 KNOXVILLE, Tenn. (AP) — Santiago Vescovi scored 16 points to lead No. 13 Tennessee to a 76-40 victory over McNeese on Wednesday night.

The Volunteers (6-1) won their fifth straight game and their first since winning the Battle 4 Atlantis in the Bahamas. Julian Phillips scored 12 points, Olivier Nkamhoua had 11 and Tyreke Key added 10. Jonas Aidoo had five blocks and six rebounds.

“We wanted to be aggressive,” said Tennessee coach Rick Barnes. “It was good that we didn't let the fact that we weren't very good on offense (in the first half).”

“You come to these games, you want to compete,” said McNeese coach John Aiken. “You want to have a better showing offensively. We didn't get any separation.”

The Cowboys (2-6) were led by Christian Shumate and Trae English with eight each.

The residual benefit from the tournament championship should pay dividends in the future.

“Last week's tournament was good for us,” said Phillips. “We're playing every game like it's the championship game.”

Tennessee coach Rick Barnes has put the ball in Josiah-Jordan James' court. The senior will decide when he is ready to return from knee soreness after offseason surgery. He went through warmups but didn't dress for the game. .... McNeese came into the game as the worst free-throw shooting team in the country (54.2%). ... Cowboys starting guard Zach Scott did not make the two-game swing to UT Martin and Tennessee because of the flu.

Tennessee learned the tough lesson that one off night can be very costly. They opened the season at No. 11. Plummeted to No. 22 after a stunning loss to Colorado. Then, recovered to No. 13 thanks to three victories in the Bahamas.

McNeese State: A quick turnaround was quite a challenge for the Cowboys. They dropped a three-point decision at UT Martin Monday, then had to come back Wednesday for a date with the Vols.

Tennessee: Getting Josiah-Jordan James into the regular rotation is a necessity before the Southeastern Conference season gets started. He has been slowed by offseason knee surgery and missed all three games in the Bahamas. The best thing about it was that the Vols learned they can win without him.

McNeese: The Cowboys will be off until Monday night when they entertain Ecclesia.

Tennessee: The Vols will be part of a men’s-women’s doubleheader Sunday, They take on Alcorn State in the evening. Tennessee’s women’s team takes on No. 9 Virginia Tech on Sunday afternoon.