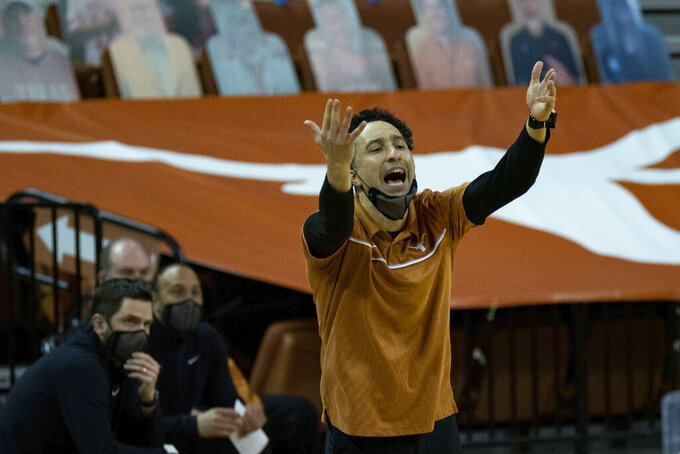 Texas head coach Shaka Smart calls out to his team during the second half of an NCAA college basketball game against West Virginia, Saturday, Feb. 20, 2021, in Austin, Texas. (AP Photo/Michael Thomas)

AUSTIN, Texas (AP) — Bob Huggins didn't divulge exactly how he lit into his West Virginia team at halftime when it trailed Texas by 10 points.

“You wouldn't want to print what was said,” the Mountaineers coach said.

The message registered. Sean McNeil and No. 13 West Virginia erased a 19-point deficit in the second half, then withstood a flurry of last-second misses to hold off No. 12 Texas 84-82 on Saturday.

“We were about as bad as we could be in the first half,” Huggins said. “This group will step up and try to meet the challenge.”

McNeil played only two minutes in the first half after picking up two fouls, and scored all 16 of his points after the break. He also committed two turnovers in the final 11 seconds, giving Texas a chance.

With Texas down by two, the Longhorns' Matt Coleman III missed the front end of a one-and-one free throw situation with eight seconds left. The Longhorns got the ball back, but Andrew Jones’ 3-point attempt rimmed out with four seconds left — he had made a 3-pointer with 1.8 seconds left to beat West Virginia 72-70 on Jan. 9.

Texas had one last try, with three-tenths of a second left, on an inbounds pass after Jones missed. But Jericho Sims missed inside after taking a lob pass from Coleman.

Ramey’s consecutive 3-pointers gave Texas an 82-81 lead with 2:55 left, but he fouled out 28 seconds later, and the Longhorns didn't score again. Sherman, trying to induce the fifth foul from Ramey, successfully used a pump fake and made two free throws to give West Virginia a lead it never lost.

Texas led by 19 Ramey made two 3-pointers and Coleman one during the first two minutes of the second half. McNeil eventually heated up for the Mountaineers, hitting a pair of 3s, the second one cutting the deficit to nine with 15 minutes left.

Texas shot 70 percent from the field while taking a 53-43 halftime lead. The 6-foot-10 Sims had four dunks and a layup in the first six minutes.

Sims left the game less than a minute later after picking up his second foul. He wasn’t the only Longhorn in foul trouble — four teammates also had two in the half, including Brock Cunningham, who was hit with a common foul and a technical after he attempted to block a shot.

The officials called 13 fouls on Texas in the half, five more than they assessed West Virginia. The Mountaineers made 15 free throws, including four after Cunningham’s foul and technical, preventing Texas from creating further separation.

After the Longhorns attained more distance in the second half, West Virginia went to work using improved shooting and tougher defense.

“We got them to take some shots that were questionable,” Matthews Jr. said.

Said Texas coach Shaka Smart, “They ramped up their defensive intensity, and we got a little tentative. And they made some tough shots.”

West Virginia: The Mountaineers returned to competition after the postponement of two games against Baylor this week -- in Morgantown and Waco -- because of COVID-19 protocols in the Baylor program. They have won six of their last seven big 12 games, losing only to Oklahoma in double overtime last week.

Texas: The Longhorns also had two games postponed this week, at Oklahoma and at Iowa State, because of the winter storm that left many in Texas without power or water. Texas was only able to practice twice during the week, on Thursday and Friday, causing coach Shaka Smart to worry about possible injuries liked torn muscles. The Longhorns certainly look ready to play but tailed off considerably after taking the 19-point lead, especially on defense.

The game Saturday turned out a lot less pleasant for Texas' Andrew Jones, whose 3-point basket with 1.8 seconds remaining beat West Virginia on Jan. 9. Not only did Jones miss a 3-pointer with four seconds left that could have won the game Saturday, he committed six turnovers and got in an argument with Ramey with 15:52 remaining. After McNeil made a 3-point basket with Jones nearby, Ramey initiated a heated conversation during a timeout. Coleman pulled Ramey away. West Virginia outscored Texas 34-18 the rest of the game. “It had an effect on the game,” Smart said. “And those guys, they’re not okay with what happened, not okay with losing.”

West Virginia could move up after a sixth win in its last seven Big 12 games. Texas has lost five of its last eight and should lose some ground.

West Virginia: The Mountaineers face TCU in Fort Worth on Tuesday. Their first scheduled meeting, on Jan.16, was postponed because of COVID-19 issues.