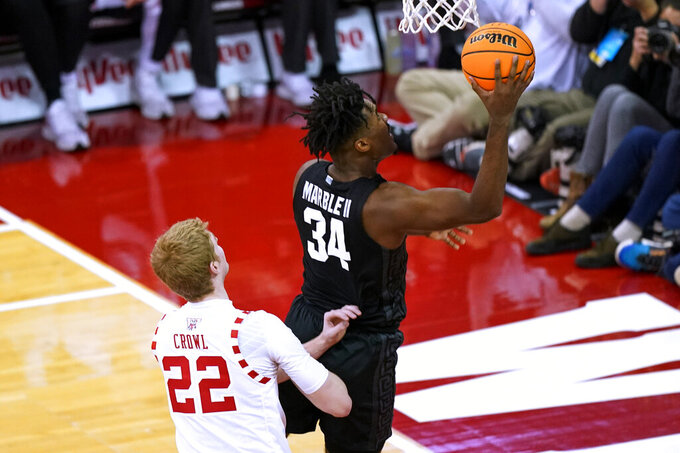 Michigan State had six days to stew over its previous game, a 64-62 home loss to Northwestern last Saturday.

“I’m happy we got a win and I’m happy we played better,” coach Tom Izzo said. “It was hell these last three days. That’s the way it’s supposed to be.”

Michigan State moved into first place in the conference, ahead of Wisconsin (15-3, 6-2) and Illinois.

Johnny Davis scored 25 points and Brad Davison added 22 for Wisconsin, which struggled to score in the first half, fell behind by double digits and couldn’t catch up.

“We made Davis work for everything, and he’s just a great player,” Izzo said.

The Badgers were without Tyler Wahl, who averaged 15.3 points over the previous seven games, because of a right ankle injury. Ben Carlson started in Wahl’s place and finished with six points in 23 minutes. Coach Greg Gard said Wahl's absence was a big factor.

“He’s important to us but we have to have other guys step up, specifically on defense,” Gard. “It took us too long to adjust to the Spartans’ transition (game). He’s an important part of who we are on both ends of the floor.”

The Spartans led 42-26 at halftime after holding the Badgers to 9-for-32 shooting. Wisconsin exceeded its lowest-scoring half of the season by just three points.

Davison scored 10 consecutive second-half points, including a 3-pointer with 14:04 to go that trimmed Michigan State’s lead to 52-41, but the Spartans had an answer almost every time.

Steven Crowl scored five points during a 7-0 run to pull to the Badgers within six points at 58-52 with 10:03 left in the game. But Wisconsin didn’t get any closer.

The Spartans shot 6-for-12 from 3-point range, including two 3s each from Christie and Akins.

“If you look at our team, everybody scored (and) everybody did something,” Izzo said. “It wasn’t smooth but we shot well, we took care of the ball decently, but the big key was the rebounding.”

Michigan State: The Spartans’ bench players were a nice complement to the team’s starters, with Hall, Hoggard and Jaden Akins (10 points) all scoring in double figures. Michigan State’s reserves finished with 43 points.

Wisconsin: Gard rotated a handful of players into the lineup to try to compensate for Wahl’s absence, but the Badgers couldn’t sustain a rhythm on offense.

Wisconsin: At Nebraska on January 25.