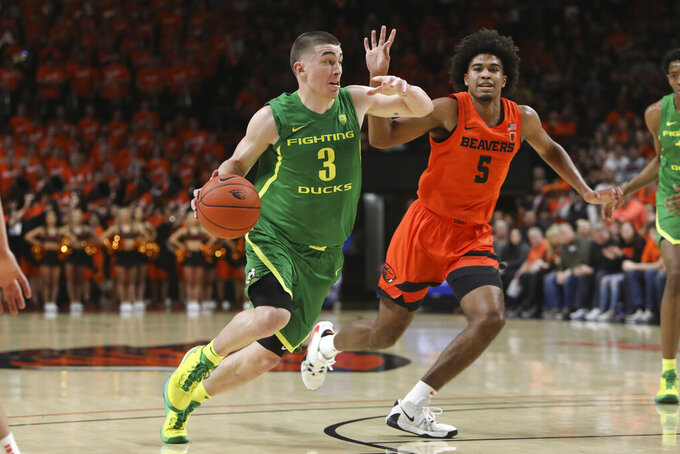 Oregon's Payton Pritchard (3) drives to the basket past Oregon State's Ethan Thompson (5) during the first half of an NCAA college basketball game in Corvallis, Ore., Saturday, Feb. 8, 2020. (AP Photo/Amanda Loman)

GAME OF THE WEEK: No. 16 Colorado at No. 17 Oregon, Thursday. The Pac-12 could get a clear front-runner or the conference race could get even more muddled after Thursday's game. The Buffaloes lead the Pac-12 at 8-3 and the Ducks are a half-game back at 7-4. Colorado is atop the Pac-12 for the first time since 2012 and has its highest ranking since 2014. The Ducks have been ranked 15 straight weeks, the program’s second-longest streak since being in the AP Top 25 19 straight weeks from 2016-17. The point guard match-up between Colorado’s McKinley Wright IV and Oregon Payton Pritchard will be worth watching. Both are on the Bob Cousy Award watch list.

LOOKING AHEAD: It will be a big week for the team behind Colorado and Oregon if they want to remain in the regular-season race. Arizona and Arizona State, both at 6-4, play the Bay Area teams this week. Stanford is 5-5. UCLA and Southern California, both 6-5, head to the Pacific Northwest to play the Washington schools. Washington State is 5-6 with Utah.

INSIDE THE NUMBERS: Oregon coach Dana Altman has 663 career victories, putting him one behind UCLA’s John Wooden. ... Arizona coach Sean Miller earned his 400th career victory with last week’s win over USC. ... Washington State’s CJ Ellerby became the first Cougars’ player since Brock Motum in 2012-13 to earn Pac-12 player of the week honors after scoring a career-high 34 points and grabbing 10 rebounds in a win over rival Washington.

PLAYER TO WATCH: Brenden Carlson, Utah. The 7-footer was named Pac-12 freshman of the week after averaging 10.5 points, 5.5 rebounds and 4.5 blocks in a sweep of the Bay Area schools.

ON THE WOMEN'S SIDE: With three weeks left in the regular season, the race to lock up first-round byes in the Pac-12 tournament is heating up. No. 6 USC, in 2009, is the only team outside the top four spots to make it to the championship game. No. 3 Oregon leads the conference at 11-1 and faces the Southern California schools. No. 7 UCLA, tied for second at 10-2, also has to face No. 11 Oregon State, which is 7-5. No. 7 Stanford, also 10-2, faces Colorado, and Utah. No. 12 Arizona, which is just a game ahead of the Beavers at 8-4, hosts the Washington schools.