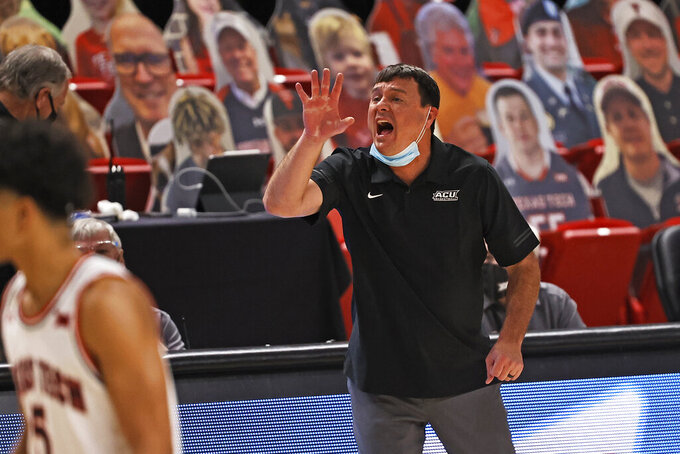 LUBBOCK, Texas (AP) — Kyler Edwards, Mac McClung and No. 17 Texas Tech couldn't get shots to fall in what was supposed to be another early season tune-up.

The Red Raiders settled for free throws, and made plenty of those after struggling at the line early.

Edwards scored 19 points and Texas Tech avoided a major upset in a defensive struggle with a 51-44 victory against Abilene Christian on Wednesday night.

“We basically found a way to win tonight from the free throw line when other areas of the game weren’t working for us,” coach Chris Beard said.

The Red Raiders (5-1) trailed with seven minutes remaining before Edwards made one of two free throws to get even and Nimari Burnett, who scored 10 points, sank a pair to put Texas Tech up for good at 38-36.

Abilene Christian's reputation for strong defense held up well, with the Red Raiders shooting 28% while having a difficult time getting open looks and missing many of the ones they did get. Texas Tech was 2 of 15 on 3-pointers.

Coryon Mason scored 14 points for the Wildcats (5-1), a Southland Conference team that made the move from Division II less than 10 years ago.

Marcus Santos-Silva made one of two free throws for Texas Tech after a foul at the other end, then the Wildcats committed turnovers on three straight possessions.

Texas Tech made just four field goals in the second half but held on by going 20 of 25 on free throws after halftime after making just five of 12 from the line in the first half. ACU's Joe Pleasant fouled out, and seven other players had three fouls apiece as the Wildcats were whistled 31 times.

“They believe in being aggressive,” Beard said. “They didn’t say, ‘Hey, we’re fouling too much, let’s try another defense.’ They kept throwing it right at us. They gave us all we could handle tonight.”

The leading scorers for both teams struggled, with McClung going 1 of 11 from the field and finishing with eight points after making six of seven free throws. Kolton Kohl of Abilene Christian missed all three of his shots and scored one point.

The Red Raiders were without starter Terrence Shannon Jr., who was in street clothes with a walking boot after spraining an ankle in a win over Grambling State in the previous game.

Abilene Christian: The Wildcats should draw quite a bit of confidence from such a strong showing in the first of two tests against Power Five teams. ACU is scheduled to visit Arkansas on Dec. 23. “This game helps us,” Golding said. “It helps us get better. And here’s the deal: The next step is to compete with these guys. I’m just really proud of my team.”

Texas Tech: While the Red Raiders had their worst shooting night in almost six years, they finally salted away perhaps their ugliest win under Beard thanks to one of McClung's misses. The Georgetown transfer had to shoot a long 3-pointer with the shot clock winding down in the final minute, and Edwards grabbed the long rebound, got fouled and made both free throws for a 48-42 lead.

STRUGGLING FROM THE FIELD

The Red Raiders were 4 of 18 from the field in the second half, with McClung and Edwards combining to go 2 of 10. Texas Tech didn't hit an outside shot after halftime. All four buckets were field goals or dunks.

“We weren’t trying to get negative in the locker room,” Edwards said. “We were just trying to stay as positive as we can. Just play our game, be more aggressive on the offensive end, defensive end, get stops.”

Abilene Christian: The Wildcats play the first of two straight games against crosstown rivals at home against McMurry on Saturday. Hardin-Simmons visits next Wednesday.

Texas Tech: The Red Raiders are set for their second neutral-site game in the Dallas area against Texas A&M-Corpus Christi on Saturday in Frisco.