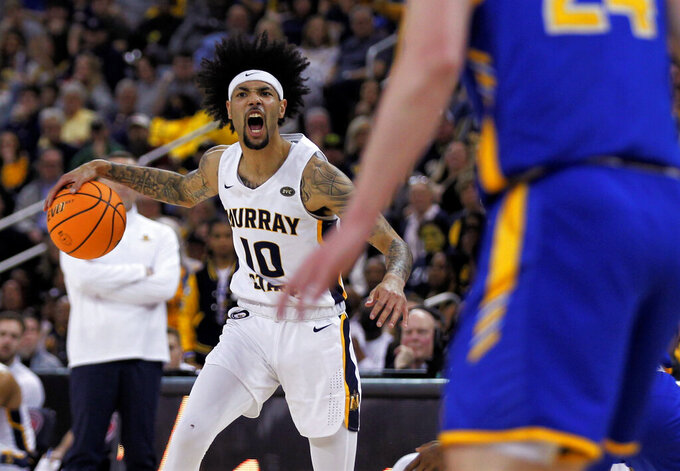 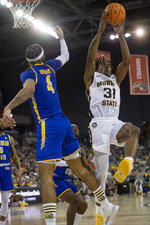 “We got our culture back,” Brown said with a championship trophy in front of him and a basketball net around his neck.

Tournament MVP Justice Hill added 21 points for the Racers (30-2), who shot just 38% from the field but won the rebounding battle 47-31 and had an edge on second-chance points (16-7). His late steal and drive and assist to 2022 OVC Player of the Year KJ Williams put Murray State up 65-61 late.

“It was just a lot of hard work,” Hill said. “I don’t really mind not being looked at. I really just want to win. Knowing I’ve got two guys on the side of me (Williams and Brown) who can go for 30-plus points each night really actually takes a lot of pressure off of me going into games knowing that these two will be the main focus of the other team.

“It really allows me to go out there and have performances like I had tonight.”

All of their efforts were needed against the defending OVC tournament champion Eagles (23-11), who got an MVP-like performance from forward Johni Broome. He shook off an injury to finish with 32 points and eight rebounds on 13-for-20 shooting.

“My teammates put trust in me by allowing me to make plays for them, to kind of lead the way,” Broome said. “But that’s a good Racers team. And it was a tough loss.”

Ta’lon Cooper had 12 points, five assists and five rebounds for Morehead State, and Tray Hollowell scored all 12 points on 3s.

After two huge runs — one from each team in the first 10 minutes — neither the Racers nor the Eagles grabbed more than a six-point advantage. Murray State was up 66-61 with less than 90 seconds to go, before back-to-back 3-pointers from Tray Hollowell kept it within 68-67.

“You’d be hard-pressed to find a better game than that in the next seven, eight days," he said. "Lot of respect for Morehead State. Coach (Preston) Spradlin’s done a terrific job building his program. But again, these guys have done it all year. They find different ways to win.”

This is Murray State’s third conference tournament title under McMahon. The Racers will move to the Missouri Valley Conference later this year.

McMahon called the game a “blur,” and Spradlin couldn’t directly point to any statistics that stood out in the loss, noting he was “supremely focused on his guys.”

Morehead State answered Murray State’s 12-2 opening run with its own 18-2 stretch. But back-to-back 3-pointers from Racers reserve guard DaQuan Smith tied it at 20.

After Broome cut the Eagle deficit to 61-60, Murray State would score the next five points. The Racers went 5-for-8 from the free-throw line in the final minute.

Murray State: The Racers fell three spots in the AP Top 25 Poll this past week despite closing the regular season with two more wins. Extending their winning streak while capturing a crown should improve their spot.

Murray State: Most bracketologists have the Racers slated in the 8/9 slot for the upcoming NCAA Tournament. A 20-win streak and an unblemished finish in the OVC might move them into a better seed.

Morehead State: The Eagles looked every bit the part of the defending champs and nearly pulled off the upset, shooting 48% for the game while only turning the ball over nine times.