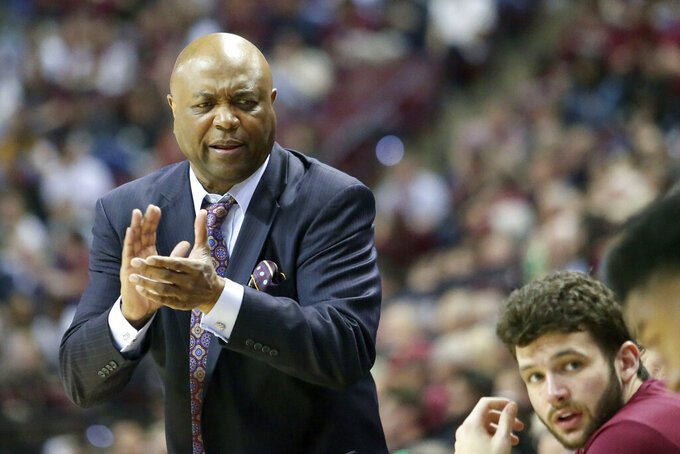 TALLAHASSEE, Fla. (AP) — The banner was ready. So was the ladder.

Dominik Olejniczak added a season-high 14 points as the Seminoles (26-5, 16-4) had everything prepared to celebrate their accomplishment, which was secured with Virginia’s victory over No. 10 Louisville. FSU will be the No. 1 seed in next week’s ACC Tournament and looks to claim its first championship since 2012.

“We’ve coined our own phrase: we’re new bloods,” FSU coach Leonard Hamilton said. “We’re not going to catch up with the 80 years that were before us. We’re fighting for our spot and our position, the hierarchy of the most respected programs in the history of college basketball.

“It’s important for us because we get a notch on our belt. And we have to enjoy this. But we think we’re just getting started.”

The Seminoles’ first NCAA Tournament appearance under Hamilton came during his seventh season in 2008-09. He now has FSU among the nation's top 10 teams and poised to earn a high seeding in the NCAA Tournament, its fourth consecutive appearance.

Koprivicia matched his season high in points as both of FSU’s 7-footers scored in double figures for the first time in ACC play. Patrick Williams had 10 points and six rebounds.

"We don’t have a post player left,” BC coach Jim Christian said. “We’re playing without three of our top five scorers. They put so much pressure on you. Obviously wore some guys down. There were careless turnovers.”

Trent Forrest was selected winner of the ACC’s Skip Prosser Award, presented to the league’s top men’s basketball student-athlete. Forrest, who has a 3.43 grade-point average, earned his bachelor’s degree in December and is working towards his master’s degree. Forrest has 1,139 points and is third in career steals with 224, fifth in assists (454) and 10th in made free throws with 334.

BC’s Steffon Mitchell was coming off double-doubles against Notre Dame and Syracuse. He went scoreless in the first half but had 12 in the second and finished with nine rebounds.

Florida State could climb higher in the rankings after closing the regular season with its sixth win in seven games.

Florida State recognized its seniors and was able to rest several starters on a memorable day.

Boston College shot just 8 of 30 (27%) from the floor in the first half and couldn’t keep up with the Seminoles’ depth.

Boston College will play Notre Dame on Wednesday in the ACC Tournament.