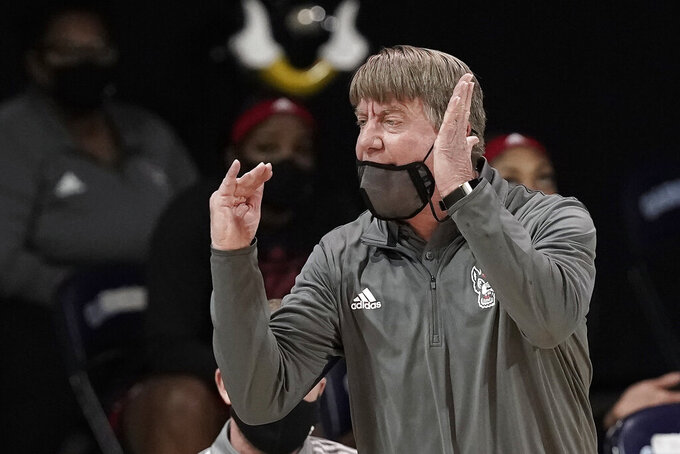 COLUMBIA, S.C. (AP) — A look at the upcoming week around the ACC:

North Carolina at No. 9 Virginia starts a tough stretch for the Cavaliers (14-3, 10-1) that could go a long way toward them winning their third ACC regular-season title since 2018. Virginia has won the past six game in the series and nine of the last 12 against the Tar Heels. Win this one and the first-place Cavaliers get an even bigger matchup two days later at No. 17 Florida State. The defending champion Seminoles are right behind one-loss Virginia with just two defeats and could tighten the league race with a victory. First, though, for the Cavaliers comes North Carolina (12-6, 7-4), which has not played since its 91-87 victory at Duke last Saturday. The Tar Heels were scheduled to play Miami at home before that game was postponed just hours before tipoff when video surfaced of unmasked North Carolina players celebrating the win over the Blue Devils. The team issued an apology on behalf of the players, managers and coach Roy Williams, saying: “We were inside and not wearing masks, which were mistakes.”

Duke (7-8, 5-6 ACC) visits North Carolina State (8-8, 4-7) and both teams are playing to make their way out of the bottom half of the ACC. Both had NCAA Tournament aspirations when the season began, but have struggled to find their footing in this pandemic-affected season. The Blue Devils have a losing record for the first time since early in the 1999 season, while the Wolfpack, who won 20-plus games in coach Kevin Keatts' first three seasons, have lost three of four.

Georgia Tech forward Moses Wright has developed into one of the most effective players in the ACC. The 6-foot-9, 233-pound senior is sixth in the league at 16.6 points per game, fifth in rebounds at 7.7 and fourth in blocks at 1.7. He's a major reason the Yellow Jackets are a surprising sixth in the league with less than a month left in the regular season. Wright and Georgia Tech are in the midst of playing three games in five days. Following a loss to No. 9 Virginia, the Yellow Jackets play at Clemson on Wednesday night before taking on Pitt at home Sunday.

Clemson forward Aamir Simms, a 6-8 senior, surpassed the 1,000-point mark in the Tigers' win over Syracuse last Saturday. ... Georgia Tech has won its past 11 games at home against ACC opponents, a program record. ... North Carolina freshman guard Caleb Love became the third Tar Heels player with at least 25 points and seven assists in a matchup against Duke, joining Charlie Scott in 1969 and Phil Ford in 1976. ... Virginia Tech's Justyn Mutts finished one rebound and three assists shy of a triple-double against Miami with 22 points, nine rebounds and seven assists.

No. 3 Louisville and No. 4 North Carolina State have dominated the headlines, the rankings and the ACC this season, yet unranked Georgia Tech is not that far behind the two power programs. The Yellow Jackets are 9-3 in the league, only two games back of Louisville and one behind NC State. Georgia Tech saw its seven-game win streak end against Wake Forest last Sunday. The Yellow Jackets are second in the league in points allowed at 60.8 this season with only Duke, which opted out of the season in December, ahead. Georgia Tech gets its offensive spark from junior guard Lotta-Maj Lahtinen, who is sixth in ACC scoring at nearly 16 points a game. Lorela Cubaj, at 6-foot-4, leads the ACC with 12 rebounds a game.