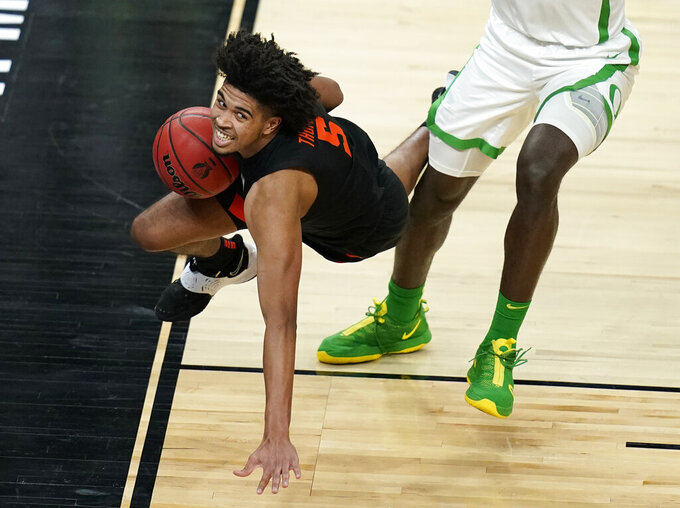 Oregon's Franck Kepnang, right, fouls Oregon State's Ethan Thompson (5) during the first half of an NCAA college basketball game in the semifinal round of the Pac-12 men's tournament Friday, March 12, 2021, in Las Vegas. (AP Photo/John Locher)

LAS VEGAS (AP) — Oregon State exceeded outside expectations by finishing sixth in the Pac-12 during the regular season after being picked last.

The Beavers have kept defying predictions in the Pac-12 Tournament, winning two games to reach the title game for the first time in 33 years.

Within the program, there was never a doubt what this team could do.

“We know what we’re capable of and we know we don’t need other people telling us where we might end up in the league or anything,” said Oregon State's Zach Reichle, who had 12 points. “We know what we can do and so that’s just what we’re doing. We’re coming out and showing it.”

The fifth-seeded Beavers (16-12) reached the conference semifinals for the first time since 2012 and dominated early, building a 19-point lead by the midpoint of the second half.

Oregon State will play in its first conference title game since 1988 and is the first team in Pac-10/12 history to get that far after being picked to finish last.

The Beavers will face No. 23 Colorado in Saturday’s championship game.

“I will tell you, we were a confident group heading into this game,” Oregon State coach Wayne Tinkle said. “We were confident this wasn’t going to be our last night here in Vegas. It's all in the way the guys responded.”

Oregon had a hard time with Oregon State's pressure early and struggled from the perimeter all night, going 6 for 25 from the arc after making 15 3-pointers in a win over the Beavers on Sunday.

Chris Duarte, LJ Figueroa and Eugene Omoruyi had 14 points each for the Ducks.

“I knew they would come after us,” Oregon coach Dana Altman said. "I tried to express that to our team, but we were just stuck in the mud from the start."

The rivals split the season series, with the Ducks beating the Beavers by 13 in the regular-season finale to win their second straight Pac-12 title.

Oregon beat Arizona State by 18 to get to the tournament semifinals and Oregon State outlasted No. 4 seed UCLA by four.

The rivals traded runs throughout the first half of the third go-round.

The Beavers had the early advantage Friday night, holding the Ducks without a field goal for 5 1/2 minutes to build a seven-point lead.

The Beavers led 38-28 at halftime and kept building from there.

Thompson hit a pair of early 3-pointers in the second half and Oregon State made six of its first 10 shots to push the lead to 55-36.

“We gave them some easy baskets early, they jumped on us, we weren’t physical right from the start, and we were just straight up and down,” Altman said.

Oregon State is playing its best basketball at the right time, putting the Beavers one game from stealing an NCAA Tournament bid.

Oregon had been playing well and had a good stretch late in the game to make it close. The Ducks' struggles in the game's first 43 minutes cost them a shot at repeating as Pac-12 Tournament champions.

Defending the 3-point line is always a priority against Oregon, but the Beavers didn't stick to the game plan and paid for it. They did in the semifinals and were reward for it.

“Well, we just got into shooters,” Tinkle said. “The whole scouting report last Sunday was to arrive with high hands, pressure them off the line. We didn’t do it. So the guys just responded and did what we did all year.”

The Beavers outrebounded Oregon 38-24 and scored 10 points on 12 offensive rebounds.

Warith Alatishe did the most damage on the glass, grabbing 12 rebounds, including seven offensive. He also had 13 points.

Oregon should be in good shape to make the NCAA Tournament on Selection Sunday.