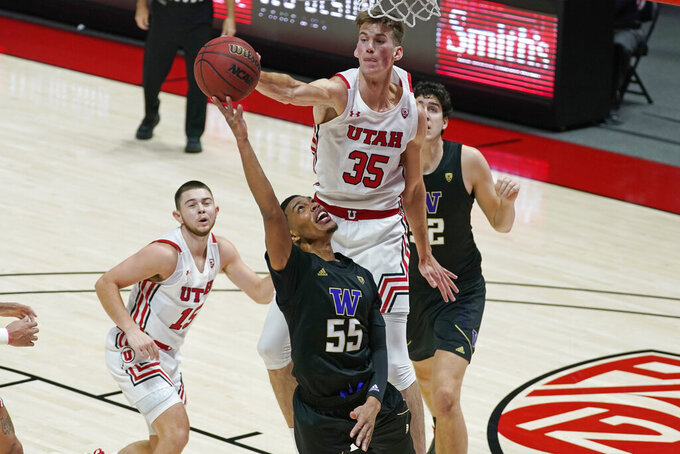 Utah center Branden Carlson (35) defends against Washington guard Quade Green (55) as he goes to the basket during the first half of an NCAA college basketball game Thursday, Dec. 3, 2020, in Salt Lake City. (AP Photo/Rick Bowmer)

SALT LAKE CITY (AP) — Alfonso Plummer scored 21 points, Timmy Allen added 14, and Utah used an 18-0 run midway through the second half to pull away for a 76-62 win over Washington on Thursday in the Pac-12 Conference opener for both schools.

Utah finally got on the court after having several early-season games canceled due to COVID-19 issues in the program. Despite no games and a lack of practice time, the Utes looked just fine rolling in their season opener.

Mikael Jantunen added 10 points as the Utes shot nearly 52% in the second half. Utah had 21 assists on 28 made field goals and scored 23 points off Washington turnovers.

Quade Green tied his career high with 21 points, but the Huskies continued to struggle at the offensive end. Washington has shot under 40% in all three of its games. Nate Roberts added 12 points and 13 rebounds. The Huskies made just 2 of 14 3-pointers in the second half.

It’s the first 0-3 start for Washington since the 2002-03 season after losses to No. 2 Baylor and UC Riverside to open the season.

Washington was within 51-46 after Green scored on a layup with 13:26 remaining, but the Huskies went cold. Plummer knocked down a pair of 3s during a run and Jantunen’s layup pushed the lead to 69-46 before Green’s 3-pointer finally stopped the drought for Washington.

Utah led by as many as 23 in the closing minutes.

The Utes will host Idaho State next Tuesday. The Huskies will play crosstown rival Seattle next Wednesday.