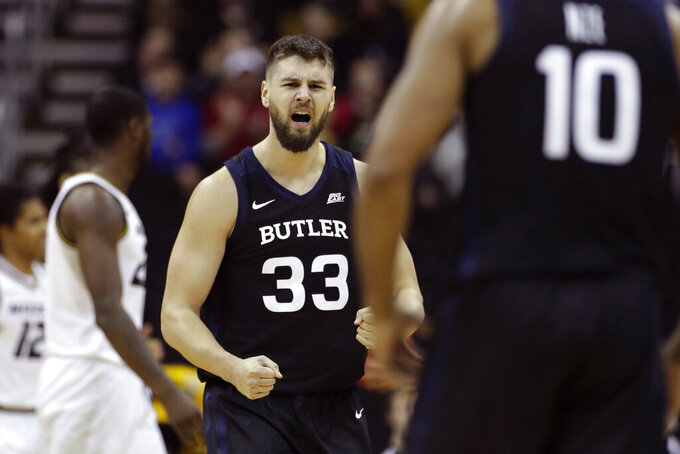 Butler forward Bryce Golden (33) celebrates after making a basket during the first half of an NCAA college basketball game against Missouri, Monday, Nov. 25, 2019, in Kansas City, Mo. (AP Photo/Charlie Riedel) 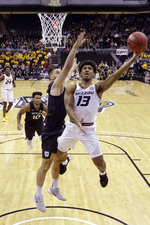 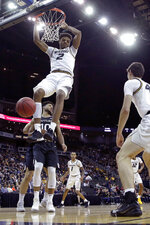 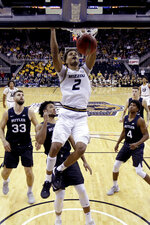 KANSAS CITY, Mo. (AP) — Butler had a perfect plan for a hostile crowd: a fast start.

The Bulldogs raced to a 15-3 lead in the first five minutes to deflate the crowd and defeated Missouri 63-52 on Monday night in the Hall of Fame Classic.

Kamar Baldwin and Bryce Golden had 13 points each and Sean McDermott finished with 10 for Butler in front of the large, hostile crowd.

Dru Smith had 19 points while Xavier Pinson contributed 10 and Kobe Brown had nine for the Tigers.

Golden matched his season average of eight points in the first five minutes of the game, hitting two 3-pointers in that stretch and the Bulldogs (6-0) never looked back.

“Watching the film, we thought we had a chance to do that early,” Butler coach LaVall Jordan said. “These guys take a game plan and executed out it, which isn’t easy to do.”

“They’re a tough match because of their guard physicality,” Jordan said. “We’ll learn and grow from that because they made some difficult shots.”

The Bulldogs forced five turnovers in the first five minutes of the game, 13 overall. On the flip side, the Tigers were able to stay in the game forcing 14 turnovers, the most in a game by the Bulldogs this season.

“Some of it was them and some of it was us,” Jordan said. “They are a physical team, but we had a lack of poise and we’ll address that. Give them credit though.”

The Bulldogs were able to out-rebound the Tigers 29-20, but Missouri had the edge scoring inside 32-26.

“You recognize the ways we need to score ball with driving the ball and scoring at the rim,” head coach Cuonzo Martin said. “I thought we did a good job driving the ball.”

Butler had as big as an 18-point lead in the first half. The teams played very even in the second half, Butler never had more than a 15-point lead and Missouri never got closer than eight.

“It wasn’t deflating, but we know we just have to keep fighting,” Smith said. “We got it down to eight or nine but couldn’t get that stop or rebound we needed.”

Butler: The Bulldogs brought the pressure from the start as they knocked off a Missouri team who was playing practically a home game.

Missouri: The Tigers fought back numerous times but couldn’t hit that big shot in the second half. When it felt like the Tigers were getting momentum, Butler came up with a stop.

Butler will play the winner of the Oklahoma-Stanford game for the championship on Tuesday night.

Missouri will play the loser of the Oklahoma-Stanford game in the Tuesday night opener.