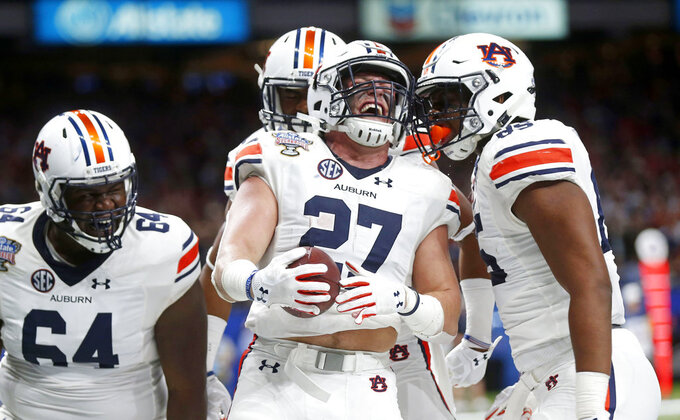 FILE - In this Jan. 2, 2017, file photo, Auburn fullback Chandler Cox (27) celebrates his touchdown carry with teammates in the first half of the Sugar Bowl NCAA college football game against Oklahoma in New Orleans. The overall graduation rates for athletes on bowl-bound FBS football programs continues to climb, though the disparity in the rates between white and African-American players widened slightly, according to a study released on Monday, Dec. 3, 2018. (AP Photo/Gerald Herbert, File)

The overall graduation rates for athletes on bowl-bound FBS football programs continue to climb, though the disparity in the rates between white and African-American players widened slightly, according to a study released on Monday.

The Institute for Diversity and Ethics and Sport shows in its report that the overall football Graduation Success Rate (GSR) is up to 79 percent, climbing from 77 percent in 2017.

"In a lot of ways it's continuing good news for college football," Lapchick said in a phone interview.

The 17 percent gap between white and black players was up slightly from 16 percent a year ago. Lapchick said the gap continues to be a major concern, but he is encouraged that the graduation rates for white and African-American football players continue to rise.

He said the disparity in graduation rates isn't a problem limited to college athletics and reflects wider trends in education. The study notes that the overall graduation rates for all African-American male students is 41 percent at Division I schools, compared to 66 percent for all white male students, citing numbers from the NCAA Education and Research Data.

"The system isn't just college athletics, it's very dependent on public high schools, middle schools and elementary schools especially in urban areas, which is where a lot of our student-athletes come from," Lapchick said. "They're underfunded, understaffed and under resourced in terms of the technology available."

Some of the highest graduation rates in the study belonged to Duke, Stanford, Notre Dame, South Carolina, Northwestern, Vanderbilt and Utah. All seven programs had at least a 93 percent graduation rate, including at least an 87 percent mark for African-American players.