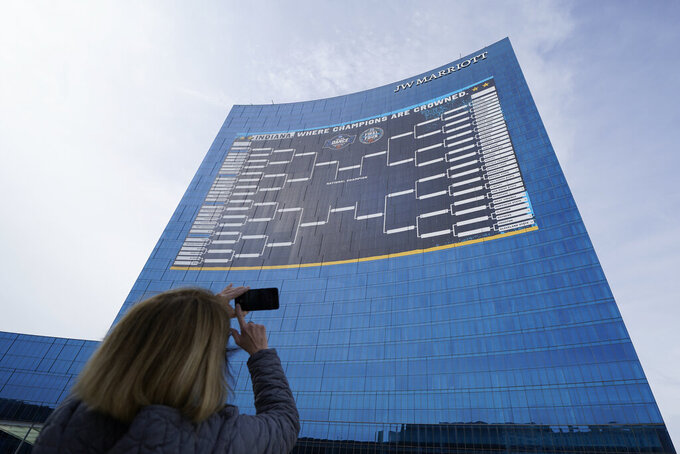 FILE - Lisa Moeller takes a photo of the NCAA bracket for the NCAA college basketball tournament on the side of the JW Marriott in downtown Indianapolis. Wednesday, March 17, 2021. Wagering on all those parlays and longshots on the betting app — fun. Filling out a bracket and waiting for the upsets to begin — that’s why they call this March Madness. (AP Photo/Darron Cummings, File)

A diversity report for graduation rates among this year's NCAA Tournament teams found the gap between white and Black men's players has shrunk compared to last season.

The study released Wednesday from The Institute for Diversity and Ethics in Sport (TIDES) at Central Florida found that racial gap in average Graduation Success Rate (GSR) scores had declined from about 13.4 percentage points last year to 11.4 this season. That was due to gains by Black players (up 3.4 percentage points to 83.7%) outpacing those by white players (up 1.3, to 95.1%),

“The gap has frequently narrowed, and especially on the men's side, when the white graduation rate when down rather than the Black graduation rate going up," institute director and lead report author Richard Lapchick told The Associated Press. “So the fact that this went up is really an important thing to note for the Black student-athletes.”

The racial gap also exists on the women's side, but is smaller.

As an example, the study found that 10 men's teams had white players ahead of Black players in graduation rates by a gap of at least 30 percentage points. UCLA, which reached last year's Final Four, had the biggest at 71 percentage points, while the list included a No. 1 seed in Arizona, Saint Mary's and Indiana all at 50.

Women continue to out perform men in average GSR, though the gender gap shrunk significantly from 10.7 percentage points last year to 6.7, with women at 93.9% and men at 87.2%. Lapchick noted, though that the women have less room to improve with their routinely higher scores.

“The gap has narrowed, so that's somewhat encouraging," Lapchick said. "But it always says to me that the emphasis has been much stronger on the women's side. I think it's gotten stronger on the men's side as they've realized with academic reforms they could not make postseason play.”

The study looked primarily at the GSR, which was developed to allow the NCAA to track the progress of Division I student-athletes for six years following their entrance to schools. GSR doesn’t penalize schools for athletes who leave in good academic standing and counts transfers at their new schools, while a federal graduation rate would consider them non-graduates and doesn’t factor in those common roster movements.