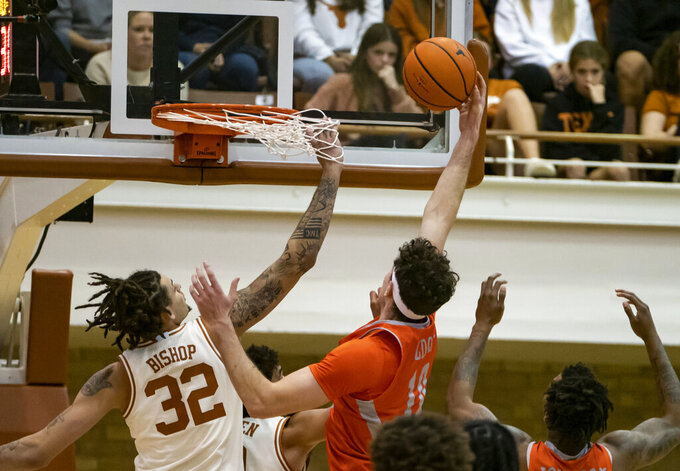 The three guards combined to hit 20 of 36 field goal attempts, including nine 3-pointers.

Just as importantly, Texas (5-0) received a boost from Dylan Disu, a 6-foot-9 senior who had 10 rebounds, a career-tying five blocks, four assists, three steals and six points in 20 minutes. Disu, the tallest Longhorn, seemed to think his rebounding was most important because he averaged 2.5 boards through four games.

“I'm sure a lot of you know about my rebounding numbers so far this season,” said Disu, who grabbed a career-best 16 as a sophomore playing for Vanderbilt against Kentucky. “The coaching staff has challenged me to crash the boards. I'm trying to work on that."

"Points off turnovers, that was the difference in the game,” UTRGV coach Matt Figger said.

The Longhorns finished with a 16-2 advantage in fast-break points, increasing their margin for the season to 94-12. They made a season-best nine blocks, four by Christian Bishop in just 13 minutes.

“The best offense we had was our defense,” Texas coach Chris Beard said. “We're only five games into this deal, but I do think we’ve established ourselves as a team that is trying to play at a great pace offensively.”

Texas raced to a 44-22 halftime lead. Helping the cause were 14 UTRGV turnovers that the Longhorns turned into 19 points.

Hunter and Carr made 3-pointers and Rice a fast-break dunk in a span of 37 seconds, creating a lead of 29 with less than eight minutes remaining in the game.

UTRGV: The Vaqueros were picked to finish last in the 13-team Western Athletic Conference by the coaches and media. Texas, with its pressure defenses, didn't give UTRGV much of a chance. The Vaqueros missed their first six shots while committing five turnovers, falling behind 10-0.

Texas: This game marked the Longhorns' second return to 3,500-seat Gregory Gym, their home court before moving to the Frank Erwin Center in 1977. Texas moved to the new Moody Center this season, but coach Chris Beard intends to play one game annually at Gregory. The packed gym was was never louder than when the athletic freshman Dillon Mitchell converted passes from Carr and Rice into two fast-break alley-oop dunks.

Texas was elevated to No. 4 from 11 last week after beating then-No. 2 Gonzaga by 19 points. The Longhorns could move up again because No. 1 North Carolina and No. 3 Kansas lost games.

The Longhorns' next two games are against No. 10 Creighton in Austin and No. 16 Illinois in New York's Madison Square Garden. Beard likened those games to the Big 12 matchups Texas will face.

“That's the way I best describe it to our team,” Beard said.

Texas plays host to No. 10 Creighton on Thursday.