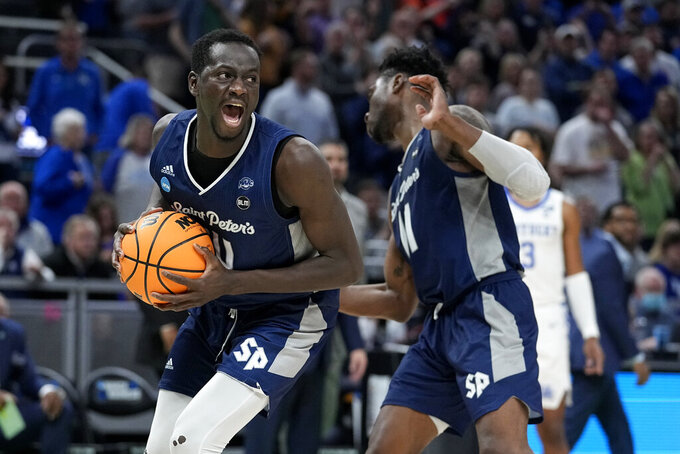 Saint Peter's forward Hassan Drame celebrates after grabbing a rebound during overtime in a college basketball game against Kentucky in the first round of the NCAA tournament, Thursday, March 17, 2022, in Indianapolis. Saint Peter's won 85-79. (AP Photo/Darron Cummings)

A look at what’s happening in the NCAA Tournament today:

Just a month ago it looked like North Carolina and first-year coach Hubert Davis might be on the wrong side of the NCAA bubble. Now the eighth-seeded Tar Heels are aiming to make some trouble for Baylor.

Knocking off the defending national champion Bears is asking a lot, but there already have been bigger surprises in this tournament and the Tar Heels are hot with wins in seven of their last eight games.

This isn't uncharted territory for Davis. He played on the eighth-seeded Carolina team that knocked off No. 1 seed Oklahoma in 1990. He also was on Roy Williams' staff for two national title games.

Davis' first tournament game as head coach, a 95-63 walkover against Marquette, was the most lopsided meeting ever between Nos. 8 and 9 seeds.

Baylor made fast work of 16th-seeded Norfolk State in an 85-49 first-round win and has won six of its last seven.

Anyone worried about the Tar Heels being overwhelmed by a pro-Baylor crowd in Fort Worth, should relax. Two weeks ago they won at Duke by double digits in front of the “Cameron Crazies” in coach Mike Krzyzewski’s final home game.

By all odds, the Saint Peter's Peacocks should have been back on campus in Jersey City, New Jersey, on Friday, not in Indianapolis preparing for a second-round game against Murray State.

Few outside the 15th-seeded Peacocks' travel party believed that a first-round upset No. 2 seed Kentucky was possible. No worries. They brought a change of clothes — a few of them, in fact.

“We came down here on a mission,” coach Shaheen Holloway said. “Not a lot of people believed that we could come out here and do what we’re doing. We came out here packed ready for Sunday. We said we were leaving on Sunday with two wins.”

Creighton will be missing 7-foot-1 center Ryan Kalkbrenner for the rest of the tournament after he injured his left knee late in the overtime win over San Diego State on Thursday.

Kalkbrenner is the Big East defensive player of the year and team's second-leading scorer and would have been Creighton's counter to big man David McCormack in a second-round game against No. 1 seed Kansas. Keyshawn Feazell, a 6-foot-9 transfer from McNeese State, is in line to make his first start for Creighton.

The Bluejays already are without Big East freshman of the year and starting point guard Ryan Nembhard, who injured his wrist three weeks ago. Trey Alexander, the hero of the first-round win, moved into Nembhard's spot.

Starting forward Arthur Kaluma also missed time in February with a knee injury, and defensive stopper Shereef Mitchell has been out all season with an undisclosed injury.

DeVante' Jones, who transferred from Coastal Carolina to Michigan so he could improve his chance of playing in the tournament, will get his opportunity.

Jones caught an elbow to the face in practice this week and had to sit out the Wolverines' win over Colorado State. Coach Juwan Howard said his starting point guard has been cleared to play against Tennessee in Indianapolis.

Jacob Gilyard has played all 40 minutes in each of Richmond's last eight games, and his season total of 1,389 minutes are most in the nation by far. Coming off an upset of Iowa, coach Chris Mooney probably won't give the fifth-year senior guard any rest when the 12th-seeded Spiders play No. 4 Providence in Buffalo, New York.

“I would just wonder what he was thinking, why he did that,” he said. "I would be interested to know what the logic was behind that, but at the end of the day I trust him. If he thinks taking me out is going to give us the best chance to win, then I’m all for it.”