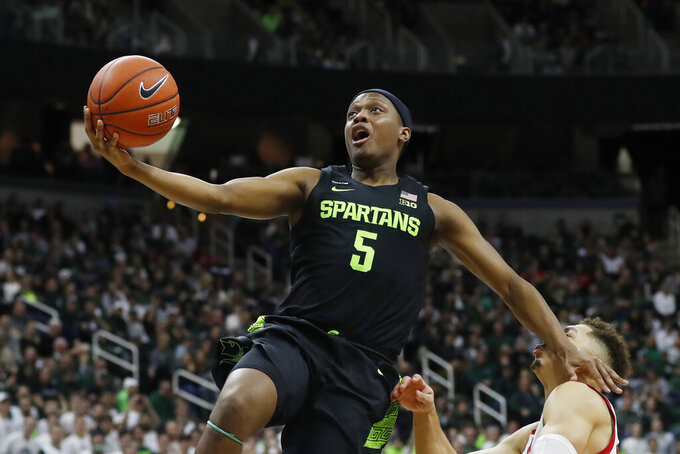 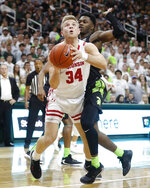 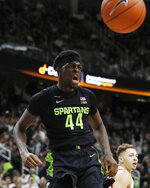 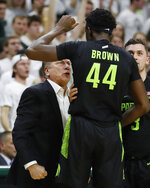 EAST LANSING, Mich. (AP) — Cassius Winston threw a lob from the right wing over the middle of the lane and Xavier Tillman dunked the basketball, breaking a record that stood for two decades.

Winston had six points, and his four assists gave him the Big Ten record for career assists as No. 15 Michigan State beat Wisconsin 67-55 Friday night.

“It was a special night," he said.

Winston connected with Tillman to give him four assists in the game and 817 in his career. Former Spartan Mateen Cleaves, who attended the game, ended his national championship-winning career with 816 assists in 2000 and was happy to have his mark surpassed by Winston.

“He's so selfless and he puts everybody first," Cleaves said. “When you have that mindset, good things always happen. Trust me, I am totally happy turning over the keys to Cassius. I think it's fantastic.

Winston knew Cleaves was pulling for him to have the record.

“A lot of times in these situations, you probably want that forever," Winston said. “But it was never like that. He was rooting for me the whole time.”

The Badgers (11-7, 4-3) trailed the entire game, but went on a 13-0 run with Nate Reuvers scoring 11 points to cut their deficit to six points early in the second half. They went on another run late in the game to make the final score look relatively respectable after trailing by as much as 25 points.

“When we were down, we ended up coming back and kept fighting," Reuvers said. “If we can take away some of their runs and be better defensively the next time we play them, we can definitely beat them."

Reuvers scored 19 points on 7-of-15 shooting and Kobe King had 10 points for the Badgers.

Michigan State pulled away in the second with balanced scoring and stingy defense, building a 63-39 lead.

Winston had his lowest scoring total in nearly two years and was 3 of 12 overall, going 0 for 3 on 3-pointers, and his teammates picked up the slack.

“I didn't really show up, but they held it down," Winston said.

Henry had five rebounds, three assists and a steal to go along with his scoring.

“They got some production from other places, but Aaron Henry was the one who impressed me by creating something out of nothing at times," Wisconsin coach Greg Gard said.

Wisconsin: The Badgers shot poorly early and didn't recover, making just 36% of their shots and just 4 of 19 3-pointers.

Michigan State: Winston can get back to playing his game after looking like he was forcing passes to get Cleaves' record out of the way. The reigning All-America and Big Ten player of the year had more turnovers (five) than assists (four) against Wisconsin.

“What I’m trying to clean up is the turnovers," Izzo said. “He’s just too good to do that.”

“I’ll be glad when he graduates and is done," Gard said, referring to Winston.

Izzo said Watts, a freshman guard from Detroit, can create his own offense off the dribble perhaps as well as anyone he has coached.

“He can get his shot off," Izzo said. “He can get separation, maybe as good. ... He reminds me of a Sam Vincent back in the day.