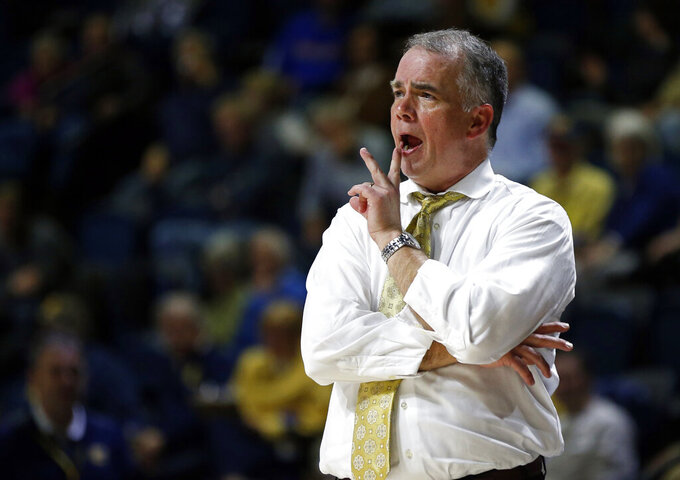 The school announced McAuley's promotion Sunday, making him just its third head coach since 1985 in a program that prides itself in building from within. That's how Young , hired by his former basketball boss-turned-athletic director Richard Johnson, got the job in 2002 and made five NCAA Tournament appearances over 17 years.

McAuley helped Young lead the Terriers to their most successful Division I season in history by going 30-5, including an 18-0 mark to win the Southern Conference. Wofford was ranked in the AP Top 25 for the first time ever and made more history in the NCAA Tournament when it defeated Seton Hall — the Terriers' first win in the Big Dance — before falling to Kentucky in the second round.

Johnson said he thought McAuley would make a good candidate for head coach when the hiring process started earlier this week.

"As we progress," Johnson said, "it became clear that he was a great choice."

McAuley was a Terriers assistant under Young from 2008-10 before leaving. He returned to the school two seasons ago.

McAuley's job comes with more expectations, too. When Young began as head coach, Wofford had never had a winning record in Division I. The Terriers have won five Southern Conference titles in the past 10 seasons.

McAuley thanked Wofford administration and supporters "who believe in my ability to continue the championship tradition that is firmly in place here."

It won't be easy. Wofford loses its top two scorers in Fletcher Magee (20.4 points a game) and forward Cameron Jackson (14.5 points), who also lead the team with 6.8 rebounds a game. Magee, the Southern Conference player of the year, left Wofford as the NCAA's Division I career leader with 509 3-pointers.

No matter. McAuley said his mission is the same as ever — recruit and graduate players, "showcase an exciting brand of basketball and win championships."

McAuley, of Marietta, Georgia, was also an assistant coach at Furman and Gardner-Webb before returning to the Terriers.