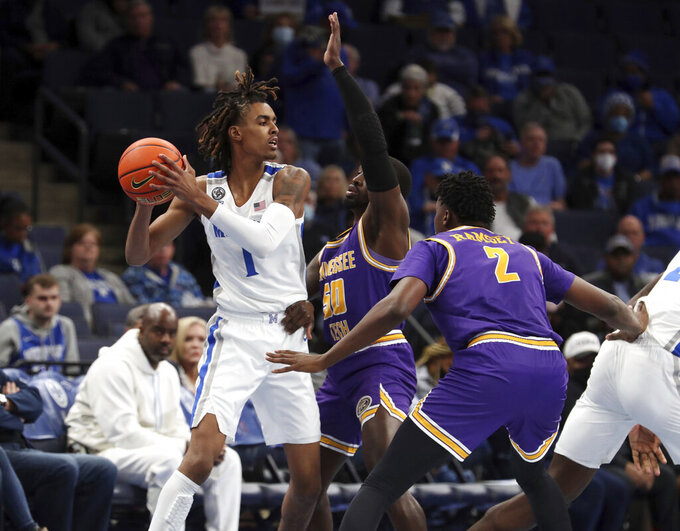 The Tigers got 12 points from DeAndre Williams, who was 6 of 7 from the floor. Memphis shot 59.3% for the game.

“They compete and they go at it,” Tennessee Tech coach John Pelphrey said of the Tigers. “Tonight, the way they moved the ball, and the way they shot it was like midseason form. It will be interesting to see if they continue that.”

The Tigers started a season with a load of promise bolstered by one of the top recruiting classes in the country, centered on Bates and Duren. Memphis also returned a core of veterans to complement the freshmen.

“We’re doing a good job of moving the basketball,” Memphis coach Penny Hardaway said. “We’re not capitalizing on fast breaks like we should, but we’re pretty good as far as starting the season off and where we are.”

“We had some very good moments in the game,” Pelphrey said. “Just wasn’t able to score and kind of keep up in the second half.”

Memphis pulled away with a 10-0 run to open the second half. That stretched the advantage to 21 and the Tigers coasted to the win. Duren added five blocks.

Tennessee Tech, which finished 5-22 last season, is picked to finish eighth in the Ohio Valley Conference.

“I thought we missed some opportunities, whether it was not converting on a couple of shots that we actually got off, but I also thought Duren took away seemed like it was more than five. He is something else around the basket,” Pelphrey said.

After Memphis built a 52-41 halftime, the Tigers’ advantage ballooned to as many as 24 in the second half behind the play of Duren and Williams on the front line.

“The sky’s the limit,” Williams said. “We’re just going to keep getting better each game. We are learning each other on and off the court, just building that chemistry. That bond. I just feel like we’re going to keep elevating throughout the season."

Hardaway added: “I’m excited about where we are and what’s to come once we really get this down.”

Tennessee Tech: The Golden Eagles kept things interesting in the first half, avoiding the blowout some expected. While not really threatening Memphis, Tennessee Tech at least kept it close for a while.

Memphis: While Tennessee Tech gave the Tigers a bit of a fight in the first half, the season opener served its purpose in getting Memphis off to a good start. While Hardaway shuffled his lineup throughout the game, Memphis showed flashes of expectations, such as shooting 62.5% in the first half, including 60% from 3. There also were struggles as Memphis committed 17 turnovers.

It is hard to take anything away from this game as far as the Tigers’ national ranking. Some of that will depend on how other teams above them fared during the season’s first week. But Memphis didn’t do anything in the season opener to discredit its slot at No. 12.

Before the game, Memphis unveiled its banner recognizing the 2021 NIT championship. The Tigers defeated Mississippi State in the finals to win the title.

Memphis: Hosts North Carolina Central on Saturday in the second game of a season-opening, four-game homestand.