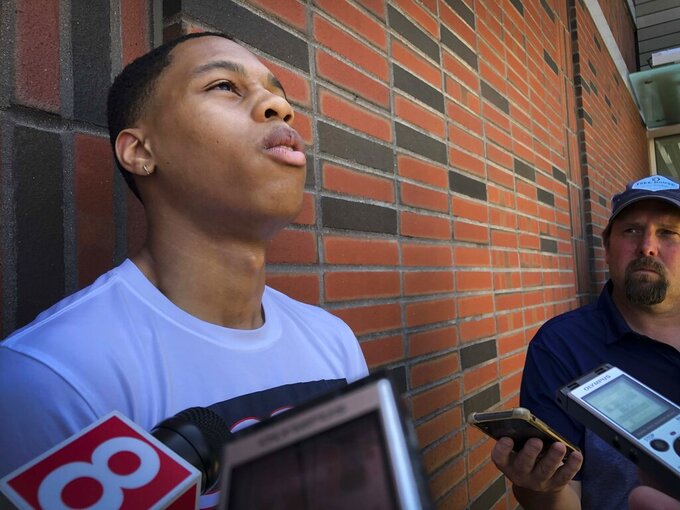 Incoming UConn freshman Jordan Hawkins speaks to the media outside the school's Werth basketball center on Wednesday, June 30, 2021, in Storrs, Conn. Hawkins is part of a highly touted 3-member recruiting class that is expected to help the Huskies compete for a Big East championship. (AP Photo/Pat Eaton-Robb)

STORRS, Conn. (AP) — Incoming freshman guard Jordan Hawkins arrived at UConn's basketball training center in May, looked up at the banners of all the players that have gone from Storrs to the NBA and one thought ran through his mind.

Those include improving on UConn's 15-8 finish last year, which ended in an opening-round NCAA Tournament loss to Maryland after the Huskies made the tournament field for the first time in five years.

“I think we're going to have a big impact, because the coaches trust us and they believe in us,” Johnson said.

Hurley has said all three have already impressed at practice and could help the Huskies move past the last 45 minutes and 7 seconds of last season, which saw the Huskies blow a lead over Creighton during the final 5:07 of their game in the Big East Tournament before losing to the Terps in the NCAA Tournament. He has said 45:07 will be a mantra this season.

Hawkins said the coach has told him he could become another James Bouknight, the team’s leading scorer last season who is projected as a first-round NBA draft pick.

Diggens said he sees himself as more of a Shabazz Napier-type playmaker and believes the 6-foot-11 Johnson, a post player with a 3-point shot, can be an impossible matchup.

“We rely on our freshmen in general, we’re less transfer portal and more relying on our young players to get on the court and perform for us early in their careers,” Hurley said of his freshmen earlier in June.

The three players arrive just as Connecticut and the NCAA are allowing athletes to profit from their names, images and likenesses. The UConn Board of Trustees approved a measure Wednesday that will allow players to sign endorsement deals starting July 12.

Coaches hope the extra money will provide an incentive for top athletes to stay in school longer, rather than jump to the professional ranks.

“Nobody has spoken to me about it yet,” said Diggins. “I don't think it's going to keep me here longer just because of that, but I don't know. I'm not sure yet.”

Right now, all three players said they are focused on adjusting to the speed of the college practices and the intensity of their head coach, which they expect will ramp up as the season approaches.