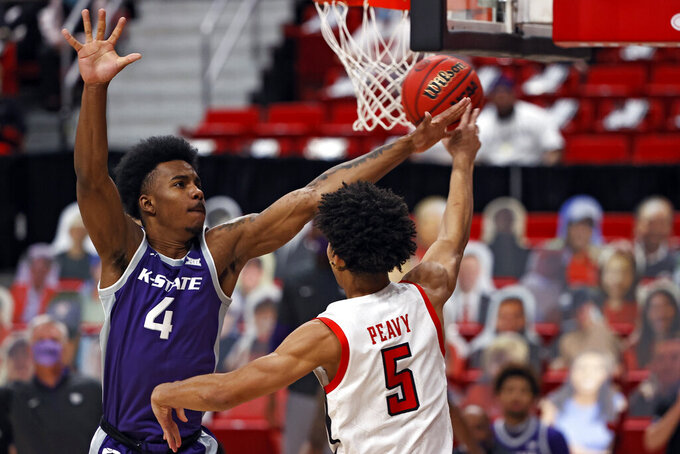 The sophomore guard was on the floor with a second remaining in the first half, and that mattered more.

Shannon beat the halftime buzzer with a jumper on his way to 22 points, Mac McClung added 16 and the No. 18 Red Raiders beat Kansas State 82-71 on Tuesday night.

“You guys know we’re always kind of tinkering with our starting lineup to see what can give us the best chance on any given night,” Beard said. “TJ actually came to me as a veteran player and said, ‘Hey coach, whatever you need tonight.’”

Marcus Santos-Silva scored 11 of his 14 points in the first half as the Red Raiders (9-3, 2-2 Big 12) picked up their first conference home victory after losing two, including to Oklahoma State three days earlier, while beating the Wildcats in Lubbock for the seventh straight time.

Shannon, who didn't start for the first time in his 11 games this season, caught an inbound pass near the free-throw line with 1 second left in the first half and hoisted a one-handed shot that bounced on the rim several times before dropping well after the buzzer sounded for a 36-31 halftime lead.

The sophomore stole a pass for a one-handed breakaway dunk during a 9-0 run in the second half for a 58-41 lead, Texas Tech's largest of the game. Shannon made 11 of 12 free throws.

“For me it wasn’t really an adjustment,” Shannon said. “I told him before the game whatever we got to do to win and if it’s me coming off the bench, I told him I’d be fine with that. It worked all right.”

Nigel Pack, one of three freshmen making a seventh straight start for Kansas State (5-7, 1-3), scored 15 of his season-high 17 points in the first half. Fellow freshman Selton Miguel matched his season high with 17 points.

Texas Tech freshman Micah Peavy, starting again after coming off the bench for the first time and going scoreless in a loss to Oklahoma State, scored the first four points of the game and finished with nine.

Santos-Silva, a graduate transfer from VCU and Texas Tech's only senior, scored the next seven points after Peavy's fast start.

A quick start for Kansas State fueled by Pack’s 3-point shooting fizzled with a 15-2 first-half run by Texas Tech that gave the Red Raiders a 25-19 lead.

The Wildcats, who led by one briefly late in the first half before falling behind for good, have lost three straight Big 12 games since winning their only other true road game of the season at Iowa State.

“We talked about growing and progressing,” coach Bruce Weber said. “You can’t improve unless you grow and progress. I thought we made some steps forward on some things.”

Kansas State: The freshmen showed their youth, starting with 7-footer Davion Bradford drawing an unnecessary fourth foul early in the second half. Miguel and Seryee Lewis were later called for technical fouls. Miguel was apparently for saying something to the officials, while Lewis appeared to taunt Santos-Silva after a basket.

“Our guys have to be more mature,” Weber said. “They’re freshmen. Those are things that they did, and it’s habits they’ve had. We have talked about it in practice. Obviously they made a mistake. They learned from it. Now you can’t have it again.”

Texas Tech: The Red Raiders cruised despite allowing their highest shooting percentage this season. Kansas State shot 49% against one of the nation's best defensive teams, although a hot start from 3 for the Wildcats cooled off in the second half (3 of 13 after halftime for 8 of 24 overall).

Peavy played just nine minutes in the 82-77 home loss in overtime to Oklahoma State after starting the first 10 games of his career. After the two quick buckets, the 2020 high school player of the year in Texas' highest classification finished 3 of 4 from the field and on free throws with three rebounds and two assists in 23 minutes.

“It’s hard being a freshman,” McClung said. “We believe in Micah and we really need Micah to be great. So we constantly remind him of that.”

Kansas State: Oklahoma State on Saturday in first of two at home.

Texas Tech: At Iowa State on Saturday in first of two on the road.