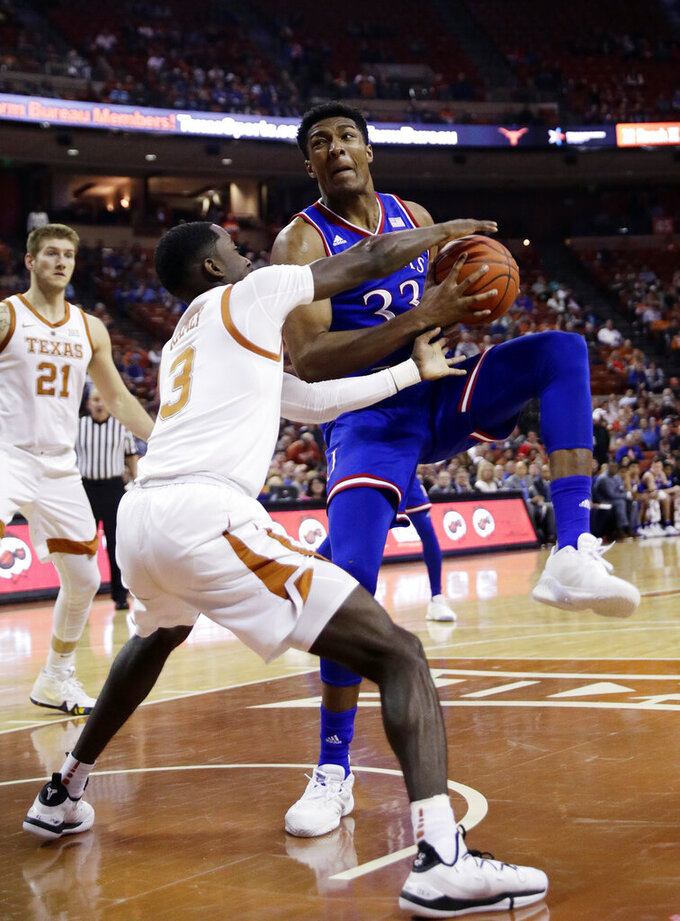 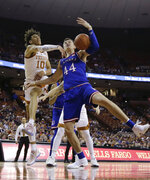 AUSTIN, Texas (AP) — Three days after he declared the Texas season at a crossroads, Longhorns senior forward Dylan Osetkowski let his wide body do the talking.

Osetkowski scored 16 points and Texas used stifling defense Tuesday night in snapping a 10-game losing streak to Kansas. Texas trailed for just nine seconds in the opening minute and batted away every run the Jayhawks made late.

Kerwin Roach II scored 15 points and Jase Febres scored 12, knocking down three critical 3-pointers for the Longhorns late in the second half.

"We've been talking about our identity being defense for a long time now," Osetkowski said. "I think tonight we showed that."

Texas held Kansas' leading scorer Dedric Lawson without a point in the first half, and held the Jayhawks to their fewest points in a half this season. Just three days earlier, the Longhorns gave up 98 in a loss to Georgia in Big 12/SEC Challenge.

Coach Shaka Smart's team limped home after that defeat, the fifth in six games, and held a players-only meeting to sort things out before the team shootaround Tuesday.

"A sense of urgency," Osetkowski said. "We talked about it before the game. We knew what we wanted to do, what we had to do. Coach always talks about being the aggressor. We did that."

Freshman Ochai Agbaji scored 24 for Kansas in his first career start. He'd only played in six games and his previous high was 10 points.

"Osetkowski, he played to his size, especially when we went small," Kansas coach Bill Self said.

Kansas cut the lead to 48-45 before Febres made two 3-pointers two minutes apart for the cushion Texas needed. Febres made another with 1:22 left that put Texas up 63-56. Texas made 21 of 23 free throws.

Smart, who is 62-59 in his four seasons at Texas, got his first win over the Jayhawks.

"Feels great, but it's more about we needed to win this game for us, regardless of who the opponent was," Smart said.

Kansas: Kansas looked befuddled early by Texas' defense, which harassed the guards on the perimeter and denied the Jayhawks on just about every chance at getting close to the basket. Kansas scored just 23 points in the first half and the Jayhawks looked like they could get blown out until an 11-1 run late in the period. Kansas never cleaned up sloppy ball-handling that led to 13 turnovers, several of them coming in the second half.

Texas: Freshman forward Jaxson Hayes set the defensive tone with two blocks in the first two minutes and a soaring, two-handed dunk on the other end. Hayes leads the Big 12 in blocks and ranked first nationally among freshmen with 2.65 per game coming in. That sort of defensive effort could carry Texas a long way through the second half of the Big 12 schedule.

All five Kansas' losses have been on the road.

"I've got to be consistent so we have our best chance to win. When I played average or below average, we lost," said Lawson, who finished with 14 points after his scoreless first half. "We've got to find ways to win on the road. ... Do something different, change shoes or something."

Roach had been the goat in a two-point loss at Kansas two weeks ago when he was out of position as Texas tried but failed to set up a winning shot. He came out firing in the rematch, making three 3-pointers in the opening minutes.

Roach didn't score again until the closing seconds when he was 6 of 6 from the line in the final 41 seconds, and those came after he had thrown the ball away on a wild turnover seconds earlier. He made up for the turnover on Texas' next possession when he chased down a rebound on a missed free throw.

Texas plays at No. 20 Iowa State on Saturday.