Providence holds on for 64-62 win over Xavier 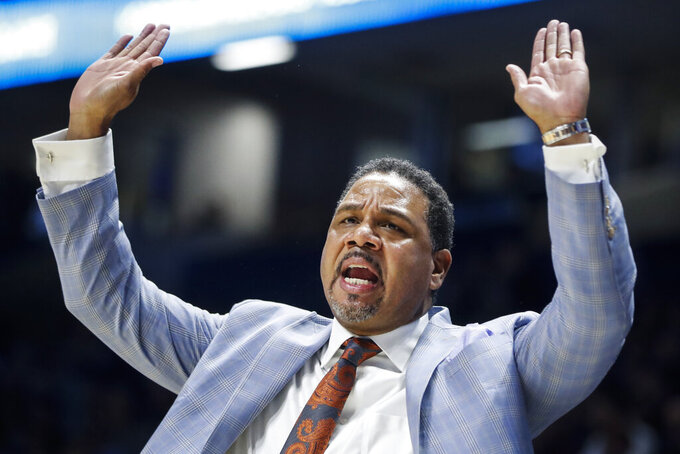 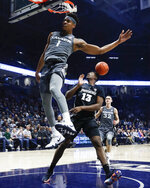 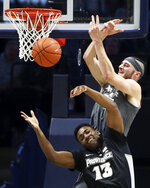 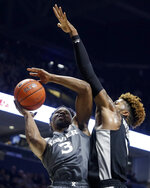 CINCINNATI (AP) — Providence coach Ed Cooley knows how to beat Xavier, but he'd never done it at the Cintas Center. Finally, he could leave town with a good feeling.

Isaiah Jackson scored 13 points , and Providence got its first Big East road win Wednesday night, holding on for a 64-62 victory over Xavier.

The Friars (12-7, 2-4) were one of only four teams to beat the Musketeers last season, doing it on the Friars' home court and again in the semifinals of the league tournament at Madison Square Garden. They were 0-7 at the Cintas Center heading into their rematch.

"This is a hard place to play," Cooley said. "I hope the plane takes off soon because I still can't believe we're leaving and we won."

That final minute was an adventure.

The Friars were ahead by 10 points with 3:44 left, but Xavier cut it to 64-62 on Paul Scruggs' 3-pointer and had the ball three times in the final 31 seconds. The Musketeers (11-9, 3-4) turned it over twice, and Scruggs missed a jumper from just inside the arc at the buzzer.

Xavier had 18 turnovers in all, with the last two making a huge difference.

"It's just the careless turnovers we had," coach Travis Steele said. "It's an absolute joke. It's a joke. We've got to get better. That's unacceptable. That's got to change for us to be good."

Nate Watson added 11 points for Providence, including a pair of free throws in the final minute. Alpha Diallo had 11 points on 4-of-13 shooting, but missed the front end of a one-and-one with 7.3 seconds to go, giving Xavier its final shot.

"Sometimes you've got to get lucky, and I thought we were really lucky to come out of here with a win," Cooley said.

The Musketeers overcame a 10-point deficit in the final 4 minutes to beat Butler in its previous home game, but couldn't pull off another late escape. Scruggs had a team-high 14 points.

"Obviously nobody wants to experience the losses, but I think there are a lot of teaching points to be made in practice tomorrow," said guard Kyle Castlin, who had a team-high 10 rebounds. "We can't dwell on the loss, for sure."

Drew Edwards had a pair of 3s during a 16-2 run that put Providence up late in the first half. Xavier went 1 of 11 and had four turnovers during the spurt.

There were two ties and two lead changes in the second half before Providence went on a 17-7 run for its biggest lead of the game. Isaiah Jackson's layup made it 62-52 with 3:44 to go.

Providence: The Friars are trying to climb out of the Big East's cellar. They were the only team with one league win coming into the game, a 72-73 home victory over Seton Hall last week.

Xavier: Point guard Quentin Goodin came off the bench for a second straight game after missing two with an injured right knee. He had six points and six turnovers in 24 minutes.

"Goodin looks like he's still hobbling a little bit," Cooley said. "He doesn't have that burst of speed he normally has."

The Friars were one of only four teams to beat Xavier last season, along with Arizona State, Villanova and Florida State. Xavier leads the all-time series 8-7.

Providence freshman guard A.J. Reeves missed his ninth game with a foot injury. He averaged 14.2 points and was the Big East's Freshman of the Week three times before he got hurt.

Steele slapped his right hand on the scorers' table after Xavier gave up a dunk late in the first half.

Xavier hosts No. 12 Marquette on Saturday. The Musketeers lost at Marquette 70-52 on Jan. 6.